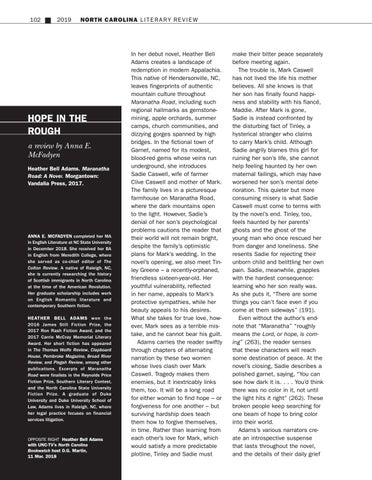 ANNA E. MCFADYEN completed her MA in English Literature at NC State University in December 2018. She received her BA in English from Meredith College, where she served as co-chief editor of The Colton Review. A native of Raleigh, NC, she is currently researching the history of Scottish immigrants in North Carolina at the time of the American Revolution. Her graduate scholarship includes work on English Romantic literature and contemporary Southern fiction. HEATHER BELL ADAMS won the 2016 James Still Fiction Prize, the 2017 Ron Rash Fiction Award, and the 2017 Carrie McCray Memorial Literary Award. Her short fiction has appeared in The Thomas Wolfe Review, Clapboard House, Pembroke Magazine, Broad River Review, and Pisgah Review, among other publications. Excerpts of Maranatha Road were finalists in the Reynolds Price Fiction Prize, Southern Literary Contest, and the North Carolina State University Fiction Prize. A graduate of Duke University and Duke University School of Law, Adams lives in Raleigh, NC, where her legal practice focuses on financial services litigation.

In her debut novel, Heather Bell Adams creates a landscape of redemption in modern Appalachia. This native of Hendersonville, NC, leaves fingerprints of authentic mountain culture throughout Maranatha Road, including such regional hallmarks as gemstonemining, apple orchards, summer camps, church communities, and dizzying gorges spanned by high bridges. In the fictional town of Garnet, named for its modest, blood-red gems whose veins run underground, she introduces Sadie Caswell, wife of farmer Clive Caswell and mother of Mark. The family lives in a picturesque farmhouse on Maranatha Road, where the dark mountains open to the light. However, Sadie’s denial of her son’s psychological problems cautions the reader that their world will not remain bright, despite the family’s optimistic plans for Mark’s wedding. In the novel’s opening, we also meet Tinley Greene – a recently-orphaned, friendless sixteen-year-old. Her youthful vulnerability, reflected in her name, appeals to Mark’s protective sympathies, while her beauty appeals to his desires. What she takes for true love, however, Mark sees as a terrible mistake, and he cannot bear his guilt. Adams carries the reader swiftly through chapters of alternating narration by these two women whose lives clash over Mark Caswell. Tragedy makes them enemies, but it inextricably links them, too. It will be a long road for either woman to find hope – or forgiveness for one another – but surviving hardship does teach them how to forgive themselves, in time. Rather than learning from each other’s love for Mark, which would satisfy a more predictable plotline, Tinley and Sadie must

make their bitter peace separately before meeting again. The trouble is, Mark Caswell has not lived the life his mother believes. All she knows is that her son has finally found happiness and stability with his fiancé, Maddie. After Mark is gone, Sadie is instead confronted by the disturbing fact of Tinley, a hysterical stranger who claims to carry Mark’s child. Although Sadie angrily blames this girl for ruining her son’s life, she cannot help feeling haunted by her own maternal failings, which may have worsened her son’s mental deterioration. This quieter but more consuming misery is what Sadie Caswell must come to terms with by the novel’s end. Tinley, too, feels haunted by her parents’ ghosts and the ghost of the young man who once rescued her from danger and loneliness. She resents Sadie for rejecting their unborn child and belittling her own pain. Sadie, meanwhile, grapples with the hardest consequence: learning who her son really was. As she puts it, “There are some things you can’t face even if you come at them sideways” (191). Even without the author’s endnote that “Maranatha” “roughly means the Lord, or hope, is coming” (263), the reader senses that these characters will reach some destination of peace. At the novel’s closing, Sadie describes a polished garnet, saying, “You can see how dark it is. . . . You’d think there was no color in it, not until the light hits it right” (262). These broken people keep searching for one beam of hope to bring color into their world. Adams’s various narrators create an introspective suspense that lasts throughout the novel, and the details of their daily grief