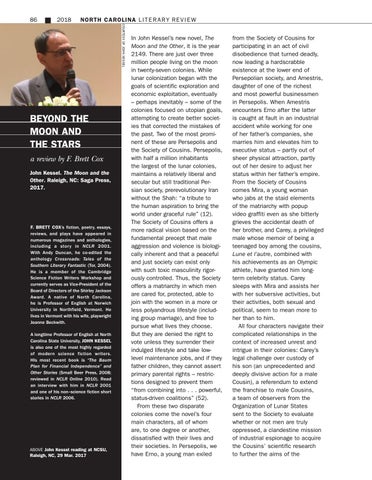 BEYOND THE MOON AND THE STARS a review by F. Brett Cox John Kessel. The Moon and the Other. Raleigh, NC: Saga Press, 2017.

F. BRETT COX’s fiction, poetry, essays, reviews, and plays have appeared in numerous magazines and anthologies, including a stor y in NCLR 2001. With Andy Duncan, he co-edited the anthology Crossroads: Tales of the Southern Literary Fantastic (Tor, 2004). He is a member of the Cambridge Science Fiction Writers Workshop and currently serves as Vice-President of the Board of Directors of the Shirley Jackson Award. A native of North Carolina, he is Professor of English at Norwich University in Northfield, Vermont. He lives in Vermont with his wife, playwright Jeanne Beckwith. A longtime Professor of English at North Carolina State University, JOHN KESSEL is also one of the most highly regarded of modern science fiction writers. HIs most recent book is “The Baum Plan for Financial Independence” and Other Stories (Small Beer Press, 2008; reviewed in NCLR Online 2010). Read an interview with him in NCLR 2001 and one of his non–science fiction short stories in NCLR 2006.

ABOVE John Kessel reading at NCSU,

In John Kessel’s new novel, The Moon and the Other, it is the year 2149. There are just over three million people living on the moon in twenty-seven colonies. While lunar colonization began with the goals of scientific exploration and economic exploitation, eventually – perhaps inevitably – some of the colonies focused on utopian goals, attempting to create better societies that corrected the mistakes of the past. Two of the most prominent of these are Persepolis and the Society of Cousins. Persepolis, with half a million inhabitants the largest of the lunar colonies, maintains a relatively liberal and secular but still traditional Persian society, prerevolutionary Iran without the Shah: “a tribute to the human aspiration to bring the world under graceful rule” (12). The Society of Cousins offers a more radical vision based on the fundamental precept that male aggression and violence is biologically inherent and that a peaceful and just society can exist only with such toxic masculinity rigorously controlled. Thus, the Society offers a matriarchy in which men are cared for, protected, able to join with the women in a more or less polyandrous lifestyle (including group marriage), and free to pursue what lives they choose. But they are denied the right to vote unless they surrender their indulged lifestyle and take lowlevel maintenance jobs, and if they father children, they cannot assert primary parental rights – restrictions designed to prevent them “from combining into . . . powerful, status-driven coalitions” (52). From these two disparate colonies come the novel’s four main characters, all of whom are, to one degree or another, dissatisfied with their lives and their societies. In Persepolis, we have Erno, a young man exiled

from the Society of Cousins for participating in an act of civil disobedience that turned deadly, now leading a hardscrabble existence at the lower end of Persepolian society, and Amestris, daughter of one of the richest and most powerful businessmen in Persepolis. When Amestris encounters Erno after the latter is caught at fault in an industrial accident while working for one of her father’s companies, she marries him and elevates him to executive status – partly out of sheer physical attraction, partly out of her desire to adjust her status within her father’s empire. From the Society of Cousins comes Mira, a young woman who jabs at the staid elements of the matriarchy with popup video graffiti even as she bitterly grieves the accidental death of her brother, and Carey, a privileged male whose memoir of being a teenaged boy among the cousins, Lune et l’autre, combined with his achievements as an Olympic athlete, have granted him longterm celebrity status. Carey sleeps with Mira and assists her with her subversive activities, but their activities, both sexual and political, seem to mean more to her than to him. All four characters navigate their complicated relationships in the context of increased unrest and intrigue in their colonies: Carey’s legal challenge over custody of his son (an unprecedented and deeply divisive action for a male Cousin), a referendum to extend the franchise to male Cousins, a team of observers from the Organization of Lunar States sent to the Society to evaluate whether or not men are truly oppressed, a clandestine mission of industrial espionage to acquire the Cousins’ scientific research to further the aims of the