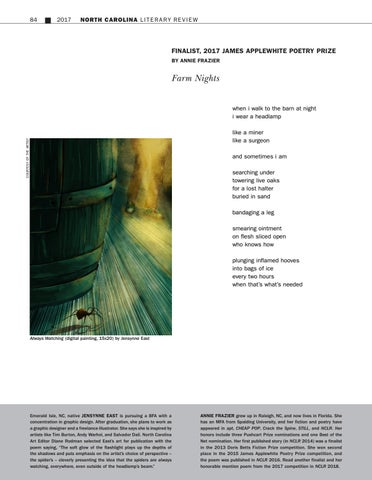 Emerald Isle, NC, native JENSYNNE EAST is pursuing a BFA with a concentration in graphic design. After graduation, she plans to work as a graphic designer and a freelance illustrator. She says she is inspired by artists like Tim Burton, Andy Warhol, and Salvador Dalí. North Carolina Art Editor Diane Rodman selected East’s art for publication with the poem saying, “The soft glow of the flashlight plays up the depths of the shadows and puts emphasis on the artist’s choice of perspective – the spider’s – cleverly presenting the idea that the spiders are always watching, everywhere, even outside of the headlamp’s beam.”

ANNIE FRAZIER grew up in Raleigh, NC, and now lives in Florida. She has an MFA from Spalding University, and her fiction and poetry have appeared in apt, CHEAP POP, Crack the Spine, STILL, and NCLR. Her honors include three Pushcart Prize nominations and one Best of the Net nomination. Her first published story (in NCLR 2014) was a finalist in the 2013 Doris Betts Fiction Prize competition. She won second place in the 2015 James Applewhite Poetry Prize competition, and the poem was published in NCLR 2016. Read another finalist and her honorable mention poem from the 2017 competition in NCLR 2018.