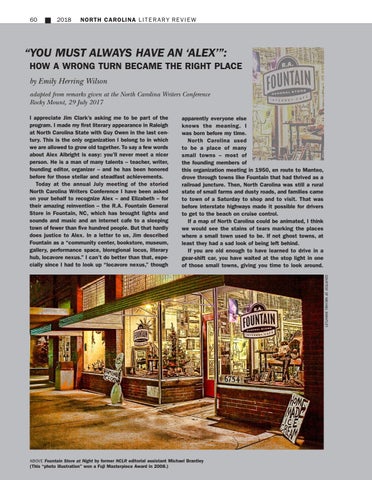 “YOU MUST ALWAYS HAVE AN ‘ALEX’”: HOW A WRONG TURN BECAME THE RIGHT PLACE by Emily Herring Wilson adapted from remarks given at the North Carolina Writers Conference Rocky Mount, 29 July 2017 I appreciate Jim Clark’s asking me to be part of the program. I made my first literary appearance in Raleigh at North Carolina State with Guy Owen in the last century. This is the only organization I belong to in which we are allowed to grow old together. To say a few words about Alex Albright is easy: you’ll never meet a nicer person. He is a man of many talents – teacher, writer, founding editor, organizer – and he has been honored before for those stellar and steadfast achievements. Today at the annual July meeting of the storied North Carolina Writers Conference I have been asked on your behalf to recognize Alex – and Elizabeth – for their amazing reinvention – the R.A. Fountain General Store in Fountain, NC, which has brought lights and sounds and music and an internet cafe to a sleeping town of fewer than five hundred people. But that hardly does justice to Alex. In a letter to us, Jim described Fountain as a “community center, bookstore, museum, gallery, performance space, bioregional locus, literary hub, locavore nexus.” I can’t do better than that, especially since I had to look up “locavore nexus,” though

apparently everyone else knows the meaning. I was born before my time. North Carolina used to be a place of many small towns – most of the founding members of this organization meeting in 1950, en route to Manteo, drove through towns like Fountain that had thrived as a railroad juncture. Then, North Carolina was still a rural state of small farms and dusty roads, and families came to town of a Saturday to shop and to visit. That was before interstate highways made it possible for drivers to get to the beach on cruise control. If a map of North Carolina could be animated, I think we would see the stains of tears marking the places where a small town used to be. If not ghost towns, at least they had a sad look of being left behind. If you are old enough to have learned to drive in a gear-shift car, you have waited at the stop light in one of those small towns, giving you time to look around. COURTESY OF MICHAEL BRANTLEY

(This “photo illustration” won a Fuji Masterpiece Award in 2008.)