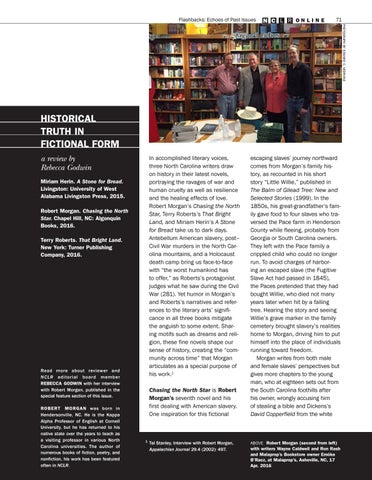 HISTORICAL TRUTH IN FICTIONAL FORM a review by Rebecca Godwin

In accomplished literary voices, three North Carolina writers draw on history in their latest novels, portraying the ravages of war and human cruelty as well as resilience and the healing effects of love. Robert Morgan’s Chasing the North Star, Terry Roberts’s That Bright Land, and Miriam Herin’s A Stone for Bread take us to dark days. Antebellum American slavery, post– Civil War murders in the North Carolina mountains, and a Holocaust death camp bring us face-to-face with “the worst humankind has to offer,” as Roberts’s protagonist judges what he saw during the Civil War (281). Yet humor in Morgan’s and Roberts’s narratives and references to the literary arts’ significance in all three books mitigate the anguish to some extent. Sharing motifs such as dreams and religion, these fine novels shape our sense of history, creating the “community across time” that Morgan articulates as a special purpose of his work.1

Read more about reviewer and NCLR editorial board member REBECCA GODWIN with her interview with Robert Morgan, published in the special feature section of this issue. ROBERT MORGAN was born in Hendersonville, NC. He is the Kappa Alpha Professor of English at Cornell University, but he has returned to his native state over the years to teach as a visiting professor in various North Carolina universities. The author of numerous books of fiction, poetry, and nonfiction, his work has been featured often in NCLR.

Chasing the North Star is Robert Morgan’s seventh novel and his first dealing with American slavery. One inspiration for this fictional

escaping slaves’ journey northward comes from Morgan’s family history, as recounted in his short story “Little Willie,” published in The Balm of Gilead Tree: New and Selected Stories (1999). In the 1850s, his great-grandfather’s family gave food to four slaves who traversed the Pace farm in Henderson County while fleeing, probably from Georgia or South Carolina owners. They left with the Pace family a crippled child who could no longer run. To avoid charges of harboring an escaped slave (the Fugitive Slave Act had passed in 1845), the Paces pretended that they had bought Willie, who died not many years later when hit by a falling tree. Hearing the story and seeing Willie’s grave marker in the family cemetery brought slavery’s realities home to Morgan, driving him to put himself into the place of individuals running toward freedom. Morgan writes from both male and female slaves’ perspectives but gives more chapters to the young man, who at eighteen sets out from the South Carolina foothills after his owner, wrongly accusing him of stealing a bible and Dickens’s David Copperfield from the white

ABOVE Robert Morgan (second from left)