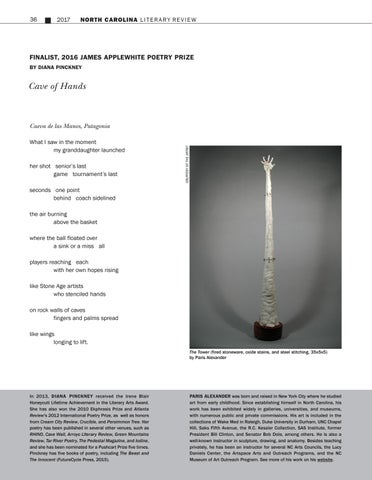 seconds one point behind coach sidelined the air burning above the basket where the ball floated over a sink or a miss all players reaching each with her own hopes rising like Stone Age artists who stenciled hands on rock walls of caves fingers and palms spread like wings longing to lift. The Tower (fired stoneware, oxide stains, and steel stitching, 35x5x5) by Paris Alexander

In 2013, DIANA PINCKNEY received the Irene Blair Honeycutt Lifetime Achievement in the Literary Arts Award. She has also won the 2010 Ekphrasis Prize and Atlanta Review’s 2012 International Poetry Prize, as well as honors from Cream City Review, Crucible, and Persimmon Tree. Her poetry has been published in several other venues, such as RHINO, Cave Wall, Arroyo Literary Review, Green Mountains Review, Tar River Poetry, The Pedestal Magazine, and Iodine, and she has been nominated for a Pushcart Prize five times. Pinckney has five books of poetry, including The Beast and The Innocent (FutureCycle Press, 2015).

PARIS ALEXANDER was born and raised in New York City where he studied art from early childhood. Since establishing himself in North Carolina, his work has been exhibited widely in galleries, universities, and museums, with numerous public and private commissions. His art is included in the collections of Wake Med in Raleigh, Duke University in Durham, UNC Chapel Hill, Saks Fifth Avenue, the R.C. Kessler Collection, SAS Institute, former President Bill Clinton, and Senator Bob Dole, among others. He is also a well-known instructor in sculpture, drawing, and anatomy. Besides teaching privately, he has been an instructor for several NC Arts Councils, the Lucy Daniels Center, the Artspace Arts and Outreach Programs, and the NC Museum of Art Outreach Program. See more of his work on his website.