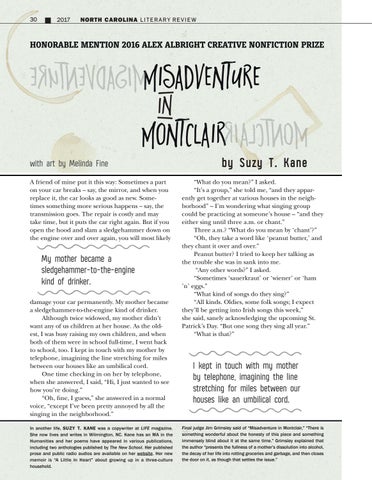 MontclairrialctnoM with art by Melinda Fine A friend of mine put it this way: Sometimes a part on your car breaks – say, the mirror, and when you replace it, the car looks as good as new. Sometimes something more serious happens – say, the transmission goes. The repair is costly and may take time, but it puts the car right again. But if you open the hood and slam a sledgehammer down on the engine over and over again, you will most likely

My mother became a sledgehammer-to-the-engine kind of drinker. damage your car permanently. My mother became a sledgehammer-to-the-engine kind of drinker. Although twice widowed, my mother didn’t want any of us children at her house. As the oldest, I was busy raising my own children, and when both of them were in school full-time, I went back to school, too. I kept in touch with my mother by telephone, imagining the line stretching for miles between our houses like an umbilical cord. One time checking in on her by telephone, when she answered, I said, “Hi, I just wanted to see how you’re doing.” “Oh, fine, I guess,” she answered in a normal voice, “except I’ve been pretty annoyed by all the singing in the neighborhood.” In another life, SUZY T. KANE was a copywriter at LIFE magazine. She now lives and writes in Wilmington, NC. Kane has an MA in the Humanities and her poems have appeared in various publications, including two anthologies published by The New School. Her published prose and public radio audios are available on her website. Her new memoir is “A Little In Heart” about growing up in a three-culture household.

by Suzy T. Kane “What do you mean?” I asked. “It’s a group,” she told me, “and they apparently get together at various houses in the neighborhood” – I’m wondering what singing group could be practicing at someone’s house – “and they either sing until three a.m. or chant.” Three a.m.? “What do you mean by ‘chant’?” “Oh, they take a word like ‘peanut butter,’ and they chant it over and over.” Peanut butter? I tried to keep her talking as the trouble she was in sank into me. “Any other words?” I asked. “Sometimes ‘sauerkraut’ or ‘wiener’ or ‘ham ’n’ eggs.” “What kind of songs do they sing?” “All kinds. Oldies, some folk songs; I expect they’ll be getting into Irish songs this week,” she said, sanely acknowledging the upcoming St. Patrick’s Day. “But one song they sing all year.” “What is that?”

I kept in touch with my mother by telephone, imagining the line stretching for miles between our houses like an umbilical cord. Final judge Jim Grimsley said of “Misadventure in Montclair,” “There is something wonderful about the honesty of this piece and something immensely blind about it at the same time.” Grimsley explained that the author “presents the fullness of a mother’s dissolution into alcohol, the decay of her life into rotting groceries and garbage, and then closes the door on it, as though that settles the issue.”