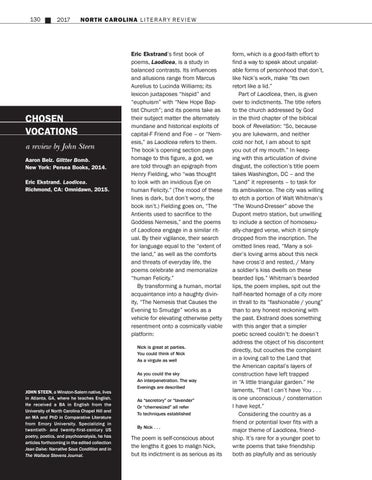 Eric Ekstrand’s first book of poems, Laodicea, is a study in balanced contrasts. Its influences and allusions range from Marcus Aurelius to Lucinda Williams; its lexicon juxtaposes “hispid” and “euphuism” with “New Hope Baptist Church”; and its poems take as their subject matter the alternately mundane and historical exploits of capital-F Friend and Foe – or “Nemesis,” as Laodicea refers to them. The book’s opening section pays homage to this figure, a god, we are told through an epigraph from Henry Fielding, who “was thought to look with an invidious Eye on human Felicity.” (The mood of these lines is dark, but don’t worry, the book isn’t.) Fielding goes on, “The Antients used to sacrifice to the Goddess Nemesis,” and the poems of Laodicea engage in a similar ritual. By their vigilance, their search for language equal to the “extent of the land,” as well as the comforts and threats of everyday life, the poems celebrate and memorialize “human Felicity.” By transforming a human, mortal acquaintance into a haughty divinity, “The Nemesis that Causes the Evening to Smudge” works as a vehicle for elevating otherwise petty resentment onto a cosmically viable platform: Nick is great at parties. You could think of Nick As a virgule as well

JOHN STEEN, a Winston-Salem native, lives in Atlanta, GA, where he teaches English. He received a BA in English from the University of North Carolina Chapel Hill and an MA and PhD in Comparative Literature from Emory University. Specializing in twentieth- and twenty-first-century US poetry, poetics, and psychoanalysis, he has articles forthcoming in the edited collection Jean Daive: Narrative Sous Condition and in The Wallace Stevens Journal.

As you could the sky An interpenetration. The way Evenings are described As “secretory” or “lavender” Or “chemesized” all refer To techniques established By Nick . . .

The poem is self-conscious about the lengths it goes to malign Nick, but its indictment is as serious as its

form, which is a good-faith effort to find a way to speak about unpalatable forms of personhood that don’t, like Nick’s work, make “Its own retort like a lid.” Part of Laodicea, then, is given over to indictments. The title refers to the church addressed by God in the third chapter of the biblical book of Revelation: “So, because you are lukewarm, and neither cold nor hot, I am about to spit you out of my mouth.” In keeping with this articulation of divine disgust, the collection’s title poem takes Washington, DC – and the “Land” it represents – to task for its ambivalence. The city was willing to etch a portion of Walt Whitman’s “The Wound-Dresser” above the Dupont metro station, but unwilling to include a section of homosexually-charged verse, which it simply dropped from the inscription. The omitted lines read, “Many a soldier’s loving arms about this neck have cross’d and rested, / Many a soldier’s kiss dwells on these bearded lips.” Whitman’s bearded lips, the poem implies, spit out the half-hearted homage of a city more in thrall to its “fashionable / young” than to any honest reckoning with the past. Ekstrand does something with this anger that a simpler poetic screed couldn’t: he doesn’t address the object of his discontent directly, but couches the complaint in a loving call to the Land that the American capital’s layers of construction have left trapped in “A little triangular garden.” He laments, “That I can’t have You . . . is one unconscious / consternation I have kept.” Considering the country as a friend or potential lover fits with a major theme of Laodicea, friendship. It’s rare for a younger poet to write poems that take friendship both as playfully and as seriously