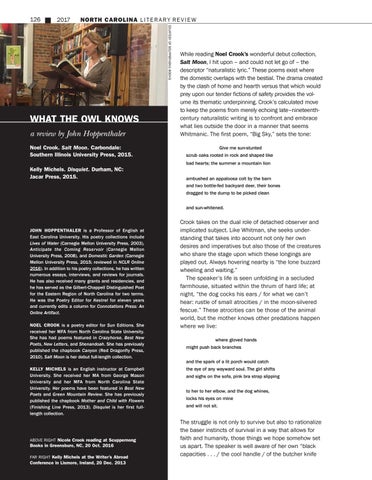 While reading Noel Crook’s wonderful debut collection, Salt Moon, I hit upon – and could not let go of – the descriptor “naturalistic lyric.” These poems exist where the domestic overlaps with the bestial. The drama created by the clash of home and hearth versus that which would prey upon our tender fictions of safety provides the volume its thematic underpinning. Crook’s calculated move to keep the poems from merely echoing late–nineteenthcentury naturalistic writing is to confront and embrace what lies outside the door in a manner that seems Whitmanic. The first poem, “Big Sky,” sets the tone: Give me sun-stunted scrub oaks rooted in rock and shaped like bad hearts; the summer a mountain lion ambushed an appaloosa colt by the barn and two bottle-fed backyard deer, their bones dragged to the dump to be picked clean and sun-whitened.

JOHN HOPPENTHALER is a Professor of English at East Carolina University. His poetry collections include Lives of Water (Carnegie Mellon University Press, 2003), Anticipate the Coming Reservoir (Carnegie Mellon University Press, 2008), and Domestic Garden (Carnegie Mellon University Press, 2015; reviewed in NCLR Online 2016). In addition to his poetry collections, he has written numerous essays, interviews, and reviews for journals. He has also received many grants and residencies, and he has served as the Gilbert-Chappell Distinguished Poet for the Eastern Region of North Carolina for two terms. He was the Poetry Editor for Kestrel for eleven years and currently edits a column for Connotations Press: An Online Artifact. NOEL CROOK is a poetry editor for Sun Editions. She received her MFA from North Carolina State University. She has had poems featured in Crazyhorse, Best New Poets, New Letters, and Shenandoah. She has previously published the chapbook Canyon (Red Dragonfly Press, 2010). Salt Moon is her debut full-length collection. KELLY MICHELS is an English instructor at Campbell University. She received her MA from George Mason University and her MFA from North Carolina State University. Her poems have been featured in Best New Poets and Green Mountain Review. She has previously published the chapbook Mother and Child with Flowers (Finishing Line Press, 2013). Disquiet is her first fulllength collection.

Crook takes on the dual role of detached observer and implicated subject. Like Whitman, she seeks understanding that takes into account not only her own desires and imperatives but also those of the creatures who share the stage upon which these longings are played out. Always hovering nearby is “the lone buzzard wheeling and waiting.” The speaker’s life is seen unfolding in a secluded farmhouse, situated within the thrum of hard life; at night, “the dog cocks his ears / for what we can’t hear: rustle of small atrocities / in the moon-silvered fescue.” These atrocities can be those of the animal world, but the mother knows other predations happen where we live: where gloved hands might push back branches and the spark of a lit porch would catch the eye of any wayward soul. The girl shifts and sighs on the sofa, pink bra strap slipping to her to her elbow, and the dog whines, locks his eyes on mine and will not sit.

The struggle is not only to survive but also to rationalize the baser instincts of survival in a way that allows for faith and humanity, those things we hope somehow set us apart. The speaker is well aware of her own “black capacities . . . / the cool handle / of the butcher knife