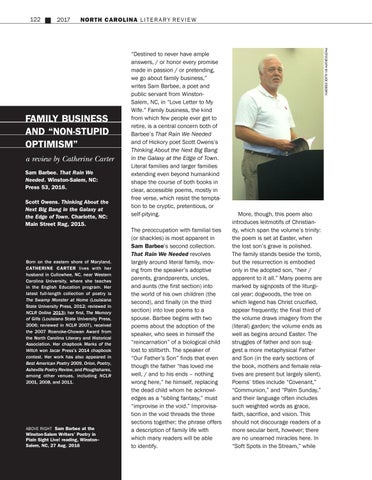 a review by Catherine Carter Sam Barbee. That Rain We Needed. Winston-Salem, NC: Press 53, 2016. Scott Owens. Thinking About the Next Big Bang in the Galaxy at the Edge of Town. Charlotte, NC: Main Street Rag, 2015.

Born on the eastern shore of Maryland, CATHERINE CARTER lives with her husband in Cullowhee, NC, near Western Carolina University, where she teaches in the English Education program. Her latest full-length collection of poetry is The Swamp Monster at Home (Louisiana State University Press, 2012; reviewed in NCLR Online 2013); her first, The Memory of Gills (Louisiana State University Press, 2006; reviewed in NCLR 2007), received the 2007 Roanoke-Chowan Award from the North Carolina Literary and Historical Association. Her chapbook Marks of the Witch won Jacar Press’s 2014 chapbook contest. Her work has also appeared in Best American Poetry 2009, Orion, Poetry, Asheville Poetry Review, and Ploughshares, among other venues, including NCLR 2001, 2008, and 2011.

The preoccupation with familial ties (or shackles) is most apparent in Sam Barbee’s second collection. That Rain We Needed revolves largely around literal family, moving from the speaker’s adoptive parents, grandparents, uncles, and aunts (the first section) into the world of his own children (the second), and finally (in the third section) into love poems to a spouse. Barbee begins with two poems about the adoption of the speaker, who sees in himself the “reincarnation” of a biological child lost to stillbirth. The speaker of “Our Father’s Son” finds that even though the father “has loved me well, / and to his ends – nothing wrong here,” he himself, replacing the dead child whom he acknowledges as a “sibling fantasy,” must “improvise in the void.” Improvisation in the void threads the three sections together; the phrase offers a description of family life with which many readers will be able to identify.

“Destined to never have ample answers, / or honor every promise made in passion / or pretending, we go about family business,” writes Sam Barbee, a poet and public servant from WinstonSalem, NC, in “Love Letter to My Wife.” Family business, the kind from which few people ever get to retire, is a central concern both of Barbee’s That Rain We Needed and of Hickory poet Scott Owens’s Thinking About the Next Big Bang in the Galaxy at the Edge of Town. Literal families and larger families extending even beyond humankind shape the course of both books in clear, accessible poems, mostly in free verse, which resist the temptation to be cryptic, pretentious, or self-pitying.

More, though, this poem also introduces leitmotifs of Christianity, which span the volume’s trinity: the poem is set at Easter, when the lost son’s grave is polished. The family stands beside the tomb, but the resurrection is embodied only in the adopted son, “heir / apparent to it all.” Many poems are marked by signposts of the liturgical year; dogwoods, the tree on which legend has Christ crucified, appear frequently; the final third of the volume draws imagery from the (literal) garden; the volume ends as well as begins around Easter. The struggles of father and son suggest a more metaphysical Father and Son (in the early sections of the book, mothers and female relatives are present but largely silent). Poems’ titles include “Covenant,” “Communion,” and “Palm Sunday,” and their language often includes such weighted words as grace, faith, sacrifice, and vision. This should not discourage readers of a more secular bent, however; there are no unearned miracles here. In “Soft Spots in the Stream,” while