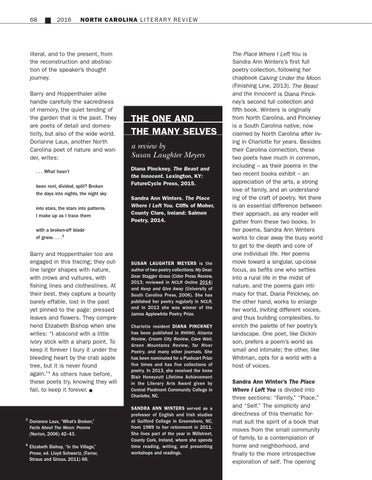 literal, and to the present, from the reconstruction and abstraction of the speaker’s thought journey. Barry and Hoppenthaler alike handle carefully the sacredness of memory, the quiet tending of the garden that is the past. They are poets of detail and domesticity, but also of the wide world. Dorianne Laux, another North Carolina poet of nature and wonder, writes: . . . What hasn’t been rent, divided, split? Broken the days into nights, the night sky into stars, the stars into patterns I make up as I trace them

THE ONE AND THE MANY SELVES a review by Susan Laughter Meyers Diana Pinckney. The Beast and the Innocent. Lexington, KY: FutureCycle Press, 2015. Sandra Ann Winters. The Place Where I Left You. Cliffs of Moher, County Clare, Ireland: Salmon Poetry, 2014.

Barry and Hoppenthaler too are engaged in this tracing; they outline larger shapes with nature, with crows and vultures, with fishing lines and clotheslines. At their best, they capture a bounty barely effable, lost in the past yet pinned to the page: pressed leaves and flowers. They comprehend Elizabeth Bishop when she writes: “I abscond with a little ivory stick with a sharp point. To keep it forever I bury it under the bleeding heart by the crab apple tree, but it is never found again.”4 As others have before, these poets try, knowing they will fail, to keep it forever. n

SUSAN LAUGHTER MEYERS is the author of two poetry collections: My Dear, Dear Stagger Grass (Cider Press Review, 2013; reviewed in NCLR Online 2014) and Keep and Give Away (University of South Carolina Press, 2006). She has published her poetry regularly in NCLR, and in 2013 she was winner of the James Applewhite Poetry Prize. Charlotte resident DIANA PINCKNEY has been published in RHINO, Atlanta Review, Cream City Review, Cave Wall, Green Mountains Review, Tar River Poetry, and many other journals. She has been nominated for a Pushcart Prize five times and has five collections of poetry. In 2013, she received the Irene Blair Honeycutt Lifetime Achievement in the Literary Arts Award given by Central Piedmont Community College in Charlotte, NC. SANDRA ANN WINTERS served as a professor of English and Irish studies at Guilford College in Greensboro, NC, from 1989 to her retirement in 2011. She lives part of the year in Millstreet, County Cork, Ireland, where she spends time reading, writing, and presenting workshops and readings.

The Place Where I Left You is Sandra Ann Winters’s first full poetry collection, following her chapbook Calving Under the Moon (Finishing Line, 2013). The Beast and the Innocent is Diana Pinckney’s second full collection and fifth book. Winters is originally from North Carolina, and Pinckney is a South Carolina native, now claimed by North Carolina after living in Charlotte for years. Besides their Carolina connection, these two poets have much in common, including – as their poems in the two recent books exhibit – an appreciation of the arts, a strong love of family, and an understanding of the craft of poetry. Yet there is an essential difference between their approach, as any reader will gather from these two books. In her poems, Sandra Ann Winters works to clear away the busy world to get to the depth and core of one individual life. Her poems move toward a singular, up-close focus, as befits one who settles into a rural life in the midst of nature, and the poems gain intimacy for that. Diana Pinckney, on the other hand, works to enlarge her world, inviting different voices, and thus building complexities, to enrich the palette of her poetry’s landscape. One poet, like Dickinson, prefers a poem’s world as small and intimate; the other, like Whitman, opts for a world with a host of voices. Sandra Ann Winter’s The Place Where I Left You is divided into three sections: “Family,” “Place,” and “Self.” The simplicity and directness of this thematic format suit the spirit of a book that moves from the small community of family, to a contemplation of home and neighborhood, and finally to the more introspective exploration of self. The opening