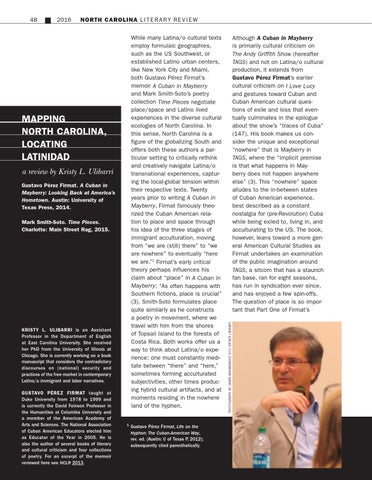 NORTH CAROLINA L I T E R A R Y RE V I E W While many Latina/o cultural texts employ formulaic geographies, such as the US Southwest, or established Latino urban centers, like New York City and Miami, both Gustavo Pérez Firmat’s memoir A Cuban in Mayberry and Mark Smith-Soto’s poetry collection Time Pieces negotiate place/space and Latino lived experiences in the diverse cultural ecologies of North Carolina. In this sense, North Carolina is a figure of the globalizing South and offers both these authors a particular setting to critically rethink and creatively navigate Latina/o transnational experiences, capturing the local-global tension within their respective texts. Twenty years prior to writing A Cuban in Mayberry, Firmat famously theorized the Cuban American relation to place and space through his idea of the three stages of immigrant acculturation, moving from “we are (still) there” to “we are nowhere” to eventually “here we are.”1 Firmat’s early critical theory perhaps influences his claim about “place” in A Cuban in Mayberry: “As often happens with Southern fictions, place is crucial” (3). Smith-Soto formulates place quite similarly as he constructs a poetry in movement, where we travel with him from the shores of Topsail Island to the forests of Costa Rica. Both works offer us a way to think about Latina/o experience: one must constantly meditate between “there” and “here,” sometimes forming acculturated subjectivities, other times producing hybrid cultural artifacts, and at moments residing in the nowhere land of the hyphen.

KRISTY L. ULIBARRI is an Assistant Professor in the Department of English at East Carolina University. She received her PhD from the University of Illinois at Chicago. She is currently working on a book manuscript that considers the contradictory discourses on (national) security and practices of the free market in contemporary Latino/a immigrant and labor narratives. GUSTAVO PÉREZ FIRMAT taught at Duke University from 1978 to 1999 and is currently the David Feinson Professor in the Humanities at Columbia University and a member of the American Academy of Arts and Sciences. The National Association of Cuban American Educators elected him as Educator of the Year in 2005. He is also the author of several books of literary and cultural criticism and four collections of poetry. For an excerpt of the memoir reviewed here see NCLR 2013.

Although A Cuban in Mayberry is primarily cultural criticism on The Andy Griffith Show (hereafter TAGS) and not on Latina/o cultural production, it extends from Gustavo Pérez Firmat’s earlier cultural criticism on I Love Lucy and gestures toward Cuban and Cuban American cultural questions of exile and loss that eventually culminates in the epilogue about the show’s “traces of Cuba” (147). His book makes us consider the unique and exceptional “nowhere” that is Mayberry in TAGS, where the “implicit premise is that what happens in Mayberry does not happen anywhere else” (3). This “nowhere” space alludes to the in-between states of Cuban American experience, best described as a constant nostalgia for (pre-Revolution) Cuba while being exiled to, living in, and acculturating to the US. The book, however, leans toward a more general American Cultural Studies as Firmat undertakes an examination of the public imagination around TAGS, a sitcom that has a staunch fan base, ran for eight seasons, has run in syndication ever since, and has enjoyed a few spin-offs. The question of place is so important that Part One of Firmat’s PHOTOGRAPH BY DAWN WAINWRIGHT, ECU JOYNER LIBRARY