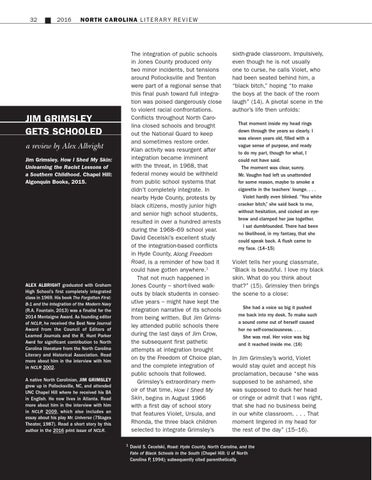 The integration of public schools in Jones County produced only two minor incidents, but tensions around Pollocksville and Trenton were part of a regional sense that this final push toward full integration was poised dangerously close to violent racial confrontations. Conflicts throughout North Carolina closed schools and brought out the National Guard to keep and sometimes restore order. Klan activity was resurgent after integration became imminent with the threat, in 1968, that federal money would be withheld from public school systems that didn’t completely integrate. In nearby Hyde County, protests by black citizens, mostly junior high and senior high school students, resulted in over a hundred arrests during the 1968–69 school year. David Cecelski’s excellent study of the integration-based conflicts in Hyde County, Along Freedom Road, is a reminder of how bad it could have gotten anywhere.1 That not much happened in Jones County – short-lived walkouts by black students in consecutive years – might have kept the integration narrative of its schools from being written. But Jim Grimsley attended public schools there during the last days of Jim Crow, the subsequent first pathetic attempts at integration brought on by the Freedom of Choice plan, and the complete integration of public schools that followed. Grimsley’s extraordinary memoir of that time, How I Shed My Skin, begins in August 1966 with a first day of school story that features Violet, Ursula, and Rhonda, the three black children selected to integrate Grimsley’s

JIM GRIMSLEY GETS SCHOOLED a review by Alex Albright Jim Grimsley. How I Shed My Skin: Unlearning the Racist Lessons of a Southern Childhood. Chapel Hill: Algonquin Books, 2015.

ALEX ALBRIGHT graduated with Graham High School’s first completely integrated class in 1969. His book The Forgotten First: B-1 and the Integration of the Modern Navy (R.A. Fountain, 2013) was a finalist for the 2014 Montaigne Award. As founding editor of NCLR, he received the Best New Journal Award from the Council of Editors of Learned Journals and the R. Hunt Parker Awrd for significant contribution to North Carolina literature from the North Carolina Literary and Historical Association. Read more about him in the interview with him in NCLR 2002. A native North Carolinian, JIM GRIMSLEY grew up in Pollocksville, NC, and attended UNC Chapel Hill where he received his BA in English. He now lives in Atlanta. Read more about him in the interview with him in NCLR 2009, which also includes an essay about his play Mr. Universe (7Stages Theater, 1987). Read a short story by this author in the 2016 print issue of NCLR. 1

sixth-grade classroom. Impulsively, even though he is not usually one to curse, he calls Violet, who had been seated behind him, a “black bitch,” hoping “to make the boys at the back of the room laugh” (14). A pivotal scene in the author’s life then unfolds: That moment inside my head rings down through the years so clearly. I was eleven years old, filled with a vague sense of purpose, and ready to do my part, though for what, I could not have said. The moment was clear, sunny. Mr. Vaughn had left us unattended for some reason, maybe to smoke a cigarette in the teachers’ lounge. . . . Violet hardly even blinked. “You white cracker bitch,” she said back to me, without hesitation, and cocked an eyebrow and clamped her jaw together. I sat dumbfounded. There had been no likelihood, in my fantasy, that she could speak back. A flush came to my face. (14–15)

Violet tells her young classmate, “Black is beautiful. I love my black skin. What do you think about that?” (15). Grimsley then brings the scene to a close: She had a voice so big it pushed me back into my desk. To make such a sound come out of herself caused her no self-consciousness. . . . She was real. Her voice was big and it reached inside me. (16)

In Jim Grimsley’s world, Violet would stay quiet and accept his proclamation, because “she was supposed to be ashamed, she was supposed to duck her head or cringe or admit that I was right, that she had no business being in our white classroom. . . . That moment lingered in my head for the rest of the day” (15–16).