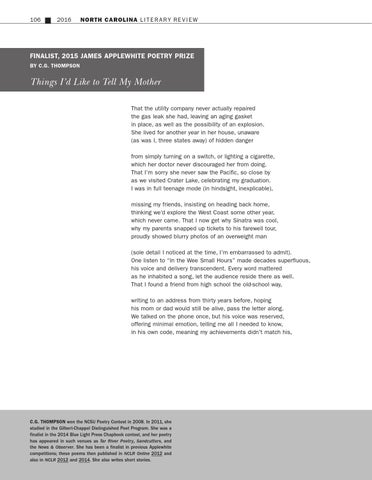 Things I’d Like to Tell My Mother That the utility company never actually repaired the gas leak she had, leaving an aging gasket in place, as well as the possibility of an explosion. She lived for another year in her house, unaware (as was I, three states away) of hidden danger from simply turning on a switch, or lighting a cigarette, which her doctor never discouraged her from doing. That I’m sorry she never saw the Pacific, so close by as we visited Crater Lake, celebrating my graduation. I was in full teenage mode (in hindsight, inexplicable), missing my friends, insisting on heading back home, thinking we’d explore the West Coast some other year, which never came. That I now get why Sinatra was cool, why my parents snapped up tickets to his farewell tour, proudly showed blurry photos of an overweight man (sole detail I noticed at the time, I’m embarrassed to admit). One listen to “In the Wee Small Hours” made decades superfluous, his voice and delivery transcendent. Every word mattered as he inhabited a song, let the audience reside there as well. That I found a friend from high school the old-school way, writing to an address from thirty years before, hoping his mom or dad would still be alive, pass the letter along. We talked on the phone once, but his voice was reserved, offering minimal emotion, telling me all I needed to know, in his own code, meaning my achievements didn’t match his,

C.G. THOMPSON won the NCSU Poetry Contest in 2008. In 2011, she studied in the Gilbert-Chappel Distinguished Poet Program. She was a finalist in the 2014 Blue Light Press Chapbook contest, and her poetry has appeared in such venues as Tar River Poetry, Sandcutters, and the News &amp; Observer. She has been a finalist in previous Applewhite competitions; these poems then published in NCLR Online 2012 and also in NCLR 2012 and 2014. She also writes short stories.