THE MIDDLE EAST IN EUROPE | MEENET.INFO | Somaliland then. And now? 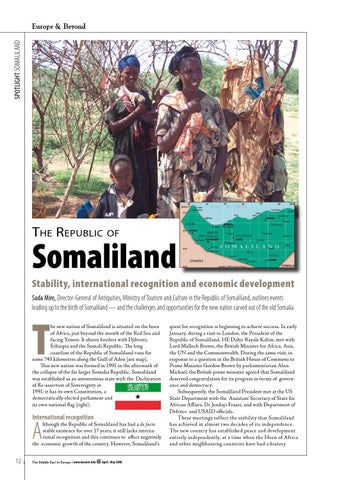 Stability, international recognition and economic development Sada Mire, Director-General of Antiquities, Ministry of Tourism and Culture in the Republic of Somaliland, outlines events leading up to the birth of Somaliland â&amp;#x20AC;&amp;#x201D; and the challenges and opportunities for the new nation carved out of the old Somalia

he new nation of Somaliland is situated on the horn of Africa, just beyond the mouth of the Red Sea and facing Yemen. It shares borders with Djibouti, Ethiopia and the Somali Republic. The long coastline of the Republic of Somaliland runs for some 740 kilometres along the Gulf of Aden [see map]. This new nation was formed in 1991 in the aftermath of the collapse of the far larger Somalia Republic. Somaliland was established as an autonomous state with the Declaration of Re-assertion of Sovereignty in 1991: it has its own Constitution, a democratically elected parliament and its own national flag (right).

lthough the Republic of Somaliland has had a de facto stable existence for over 17 years, it still lacks international recognition and this continues to affect negatively the economic growth of the country. However, Somalilandâ&amp;#x20AC;&amp;#x2122;s

quest for recognition is beginning to achieve success. In early January, during a visit to London, the President of the Republic of Somaliland, HE Dahir Rayale Kahin, met with Lord Malloch Brown, the British Minister for Africa, Asia, the UN and the Commonwealth. During the same visit, in response to a question in the British House of Commons to Prime Minister Gordon Brown by parliamentarian Alun Michael, the British prime minister agreed that Somaliland deserved congratulation for its progress in terms of governance and democracy. Subsequently, the Somaliland President met at the US State Department with the Assistant Secretary of State for African Affairs, Dr Jendayi Fraser, and with Department of Defence and USAID officials. These meetings ref lect the stability that Somaliland has achieved in almost two decades of its independence. The new country has established peace and development entirely independently, at a time when the Horn of Africa and other neighbouring countries have had a history

of instability, especially Somalia to the south with its endemic political turmoil. The Republic of Somaliland is a multi-party democracy with three major parties, the Ucid, the Udub and the Kulmiye. Its political system has been a key aspect of the new nation’s stability. Somaliland’s quest for international recognition as an independent state is being pursued through international channels, apart from the recent official contacts in London and Washington and the African Union is following closely the emergence of Somaliland as a regional model of stability, good governance and economic growth at a time when many others of its neighbours are slipping into chaos.

ecent economic development in Somaliland has seen a growing number of international agencies investing in the country. This support will promote the future of Somaliland as a peaceful and prosperous nation. The Joint Needs Assessment and Reconstruction and Development Programme (JNARDP) recently took place in Somaliland between members of the Somaliland government and international representatives of the United Nations, the European Union and the World Bank, as members of a multi-donor development programme. This is intended to empower the government of Somaliland and its nascent institutions in a five-year development plan. This is a major change of emphasis as the economy is presently entirely private, mainly driven by the substantial contribution of the Somali diaspora who have long invested independently or by Somaliland-based investors.

long with the security, health and education projects in Somaliland, the government is now encouraging the development of cultural resources, hitherto an undeveloped sector of the Somaliland economy. This new initiative of the Somaliland government is acknowledgement of the fact that the country’s culture is an essential part of sustainable human development for the future. The development of cultural resources is seen by the government to feed into all of the country’s three essential priorities — security, health and education. Culture is the backbone of the Somaliland society; it might even be, at the moment, its only resource. However, it is a resource that is virtually unrecorded and barely known to the outside world. There is not one museum in the country, and none anywhere else in the old Somalia. The Ministry of Tourism and Culture of the young country of Somaliland needs support in its efforts to protect its antiquities and its cultural heritage and legislation is currently being framed to ensure the protection of Somaliland’s archaeological monuments and national heritage. Tourism is now being promoted in the light of the country’s stability and a national tourism industry is regarded by the government as a key factor in future development. Likewise, the protection of the environment is regarded as crucial for economic development. The Department of Antiquities is making particular efforts to promote tourism from Europe and the Middle East and has established strong links with archaeologists and other regional experts to spread information about Somaliland’s potential and its importance as a destination for tourists. Somaliland has many antiquities which are barely known to experts on the region. These include a rich archaeological heritage that includes extraordinary rock art sites, standing stone stele, medieval ruined towns and mosques. At Berbera and in other towns there is fine Ottoman architecture, and British colonial architecture and war memorials, legacy of Britain’s long connection with the country. As a new country, Somaliland has its new monuments of independence that commemorate the Somaliland nation, including the Freedom Arch, and also the harsher reminders of the recent past Siad Barre regime. An aircraft that bombed Hargeysa in 1988 still stands today where it crashed in the heart of the capital, Hargeysa. The country has an unspoilt environment that the government is intent on protecting. These resources include the offshore mangroves and coral reefs on the coast, untouched and as fine as any around the Indian Ocean. In the interior there is a spectacular highland landscape and fine mountainous landscapes around Daallo. The indigenous nomadic culture still f lourishes in Somaliland. Many people live a traditional lifestyle, using livestock for a stable supply of milk, meat and tent wool. It is the role of the Department of Antiquities to record, preserve and protect Somaliland’s cultural heritage and antiquities for the benefit of the people. Further background information and news stories related to Somaliland developments: www.somalilandgov.com. Sada Mire can be contacted at: sada_mi@hotmail.com | www.meenet.info

THE MIDDLE EAST IN EUROPE | MEENET.INFO | Somaliland then. And now?

The Middle East in Europe is the definitive magazine of interest to anyone involved with the Middle East and North Africa region, MENA communities in the West and Middle Eastern developments in the region stretching from Morocco to Pakistan. With an expanding subscriber base amongst high net worth individuals, businesses, financial institutions and art and culture organisations, The Middle East in Europe is a periodical publication of choice. Published by EAPGROUP London. Websites: Meenet.info and TheMiddleEastinEurope.net. MEE is edited by Sajid Rizvi. NOTE: This is archival material and some of the information may need updating at http://somalilandgov.com/ 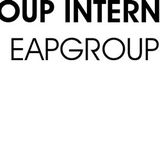