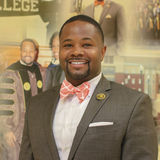 Dr. Dwaun Warmack serves as the 19th President of Harris-Stowe State University and is one of the youngest presidents of a four-year higher education institution in the United States. Dwaun Warmack began his academic career at Delta State University, where he earned his Bachelor’s degree in Education and a Master’s degree in Sociology. Later, he obtained his doctorate in Educational Leadership with a specialization in higher education from Union University, and completed his post-doctoral studies at Harvard University. Dr. Dwaun Warmack augments his professional endeavors as a peer reviewer with the Higher Learning Commission, the largest higher education regional accreditation body in the U.S. He also holds several board positions dedicated to furthering educational causes.