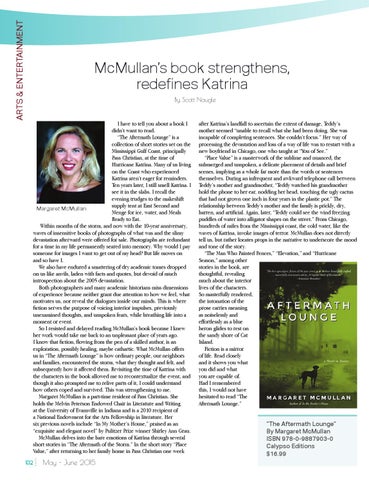 I have to tell you about a book I didn’t want to read. “The Aftermath Lounge” is a collection of short stories set on the Mississippi Gulf Coast, principally Pass Christian, at the time of Hurricane Katrina. Many of us living on the Coast who experienced Katrina aren’t eager for reminders. Ten years later, I still smell Katrina. I see it in the slabs. I recall the evening trudges to the makeshift supply tent at East Second and Margaret McMullan Menge for ice, water, and Meals Ready to Eat. Within months of the storm, and now with the 10-year anniversary, waves of insensitive books of photographs of what was and the slimy devastation afterward were offered for sale. Photographs are redundant for a time in my life permanently seared into memory. Why would I pay someone for images I want to get out of my head? But life moves on and so have I. We also have endured a smattering of dry academic tomes dropped on us like anvils, laden with facts and quotes, but devoid of much introspection about the 2005 devastation. Both photographers and many academic historians miss dimensions of experience because neither grant due attention to how we feel, what motivates us, nor reveal the dialogues inside our minds. This is where fiction serves the purpose of voicing interior impulses, previously unexamined thoughts, and unspoken fears, while breathing life into a moment or event. So I resisted and delayed reading McMullan’s book because I knew her work would take me back to an unpleasant place of years ago. I know that fiction, flowing from the pen of a skilled author, is an exploration, possibly healing, maybe cathartic. What McMullan offers us in “The Aftermath Lounge” is how ordinary people, our neighbors and families, encountered the storm, what they thought and felt, and subsequently how it affected them. Revisiting the time of Katrina with the characters in the book allowed me to recontextualize the event, and though it also prompted me to relive parts of it, I could understand how others coped and survived. This was strengthening to me. Margaret McMullan is a part-time resident of Pass Christian. She holds the Melvin Peterson Endowed Chair in Literature and Writing at the University of Evansville in Indiana and is a 2010 recipient of a National Endowment for the Arts Fellowship in literature. Her six previous novels include “In My Mother’s House,” praised as an “exquisite and elegant novel” by Pulitzer Prize winner Shirley Ann Grau. McMullan delves into the bare emotions of Katrina through several short stories in “The Aftermath of the Storm.” In the short story “Place Value,” after returning to her family home in Pass Christian one week 132

after Katrina’s landfall to ascertain the extent of damage, Teddy’s mother seemed “unable to recall what she had been doing. She was incapable of completing sentences. She couldn’t focus.” Her way of processing the devastation and loss of a way of life was to restart with a new boyfriend in Chicago, one who taught at “You of See.” “Place Value” is a masterwork of the sublime and nuanced, the submerged and unspoken, a delicate placement of details and brief scenes, implying as a whole far more than the words or sentences themselves. During an infrequent and awkward telephone call between Teddy’s mother and grandmother, “Teddy watched his grandmother hold the phone to her ear, nodding her head, touching the ugly cactus that had not grown one inch in four years in the plastic pot.” The relationship between Teddy’s mother and the family is prickly, dry, barren, and artificial. Again, later, “Teddy could see the wind freezing puddles of water into alligator shapes on the street.” From Chicago, hundreds of miles from the Mississippi coast, the cold water, like the waves of Katrina, invoke images of terror. McMullan does not directly tell us, but rather locates props in the narrative to underscore the mood and tone of the story. “The Man Who Painted Fences,” “Elevation,” and “Hurricane Season,” among other stories in the book, are thoughtful, revealing much about the interior lives of the characters. So masterfully rendered, the intonation of the prose carries meaning as noiselessly and effortlessly as a blue heron glides to rest on the sandy shore of Cat Island. Fiction is a mirror of life. Read closely and it shows you what you did and what you are capable of. Had I remembered this, I would not have hesitated to read “The Aftermath Lounge.” “The Aftermath Lounge” By Margaret McMullan ISBN 978-0-9887903-0 Calypso Editions $16.99

Special issue featuring a Wedding Planner and Find A Specialist content. Meet some of the Coast's best doctors. Also, learn about R.I.P.E., resources for the elderly, caregivers and case managers. 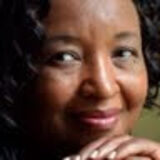