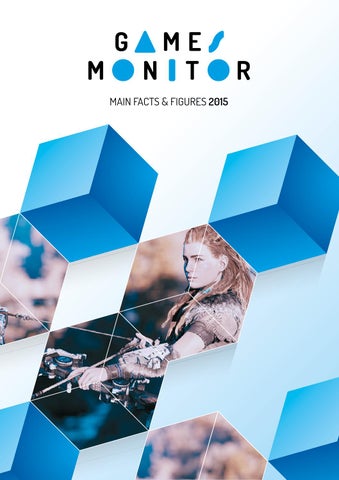 This factsheet presents an overview of the economic development of the Dutch games industry between 2011 and 2015. Research was conducted in the same manner as in 20121 to be able to compare the figures and to provide an insight in the changes in the last few years. A questionnaire was sent to more than 400 companies and returned by 130 companies. Following the presentation of the preliminary results, several industry roundtable discussions were held to further verify and analyze the results.

Definition of the Dutch Game Industry The games industry includes all companies whose core activities include at least one of the following processes in the value chain: the development, production, publication, facilitation and/or electronic distribution of electronic games. This definition entails that a significant part (at least one third) of the companyâ&#x20AC;&#x2122;s turnover and/or strategic focus should be on the development, production, publication, facilitation and/or distribution of electronic games. Note that this current definition excludes companies that are part of the ecosystem but whose core business is not games. Clients, educational institutes, research institutes, marketing companies and the media industry are involved in the games industry but are not seen as being part of the games industry. The Games Monitor further discerns two domains in the games industry: entertainment games and applied games. Entertainment games entail all electronic games that have entertainment as their primary goal. On the other hand, applied games, also referred to as serious games, aim to inform, educate or train end-users. Applied games are developed and distributed in many sectors, including education, health, transport, marketing, and defense.

1. Databases from Control, Dutch Game Garden, Chamber of Commerce and LISA were used to compile a file of all game companies. The data were collated and analyzed by TNO/NEO.

The analysis shows a rapid growth in the number of

The average size of a company in the games industry

is still relatively small: about 7 employees on average

of 42%. The same period also saw a large number of

companies close for business (110), which makes the

by the change in the structure of the games industry

overall growth even more impressive. This 42% growth is

in the Netherlands. Highest growth took place in game

mostly driven by new game developers. Whether these new

development which consists of relatively small-scale

companies will actually succeed in creating a sustainable

companies. The number of small companies in the games

business, or make the difficult transition from a start-up to

industry is rapidly increasing. This huge growth of small-

a scale-up, remains one of the biggest challenges for the

scale companies indicates that start-ups have gained a

dominant role in the industry.

The number of professionals working in the Dutch games

The positive worldwide trends are, to some extent, reflected in the developments of the Dutch gaming ecosystem. The analysis reveals that over 60% of Dutch

game companies saw a growth in revenues, with an

2. A strict deployment of the definition led to a correction of the figures for 2011. Ten companies whose core focus is not video games were deleted. These companies employed 300 people at that time. Therefore the number of employees for 2011 is corrected to 2730.

There’s almost no specialization in the type of sectors

between ‘entertainment’ and ‘applied’ games. Whereas

and clients the applied game companies work for.

applied games still have a strong foothold in the Dutch

Almost all of the surveyed studios said they were working

games industry (more so than in any other country3),

with clients from all possible sectors. Currently most of

the projects done by applied game studios are triggered

by client. This will probably shift to a more product-based

games remain an important pillar of the Dutch games

approach, in which companies develop games or IP that

industry. The total number of companies involved in

are applicable and sellable to many clients, and move

away from producing ‘one-off’ solutions for individual clients. This seems an important development towards

Fig 3. Number of gamedevelopers by specialization in 2011 and 2015, based on number of companies

people). Our data indicates an influx of small studios with modest budgets and ambition.

It is hardly a surprise that these new studios struggle to keep afloat. Based on the survey and additional data from sources like SteamSpy, we can conclude that the majority of start-ups have a low turnover and make little to no

profit. Another point of concern is the hit-driven nature of

calm as the end result may suggest. Most applied game

the games business. It is difficult to score a hit, but once a

studios indicated a sharp decline in clients in 2013 and

studio has one, it proves even more difficult to capitalize

specifically in 2014. The magnitude of this decline was

on that. With international development- and marketing

so severe that the continuity of some dedicated applied

budgets for games on the rise, a different attitude towards

game studios was threatened. Some of these companies

marketing and sales is necessary.

scaled down in workforce, leading to layoffs. Table 1: number of game students

In 2015 the number of tender requests started to rise again sharply. Some of the companies indicated having more interested clients than they could take on. Considering the recent experiences, some companies chose not to increase their workforce in order to cope with the increased number of orders. Instead they opted to consolidate and minimize risks over an increase in profits (and a potential greater risk).

A NOTICEABLE TREND AMONG THE LARGER APPLIED GAME DEVELOPMENT STUDIOS IS PARTNERING FOR EXAMPLE ON MARKETING AND PROMOTION, BUT ALSO IN FINDING STRATEGIC ALLIANCES AND FUNDING.

3. Hard evidence is difficult to find, but several talks with game representatives from other countries confirm this notion.

European comparison The trends for the Dutch games industry have been compared to European developments4. Many similarities between most European countries can be seen:

In comparison to the 2012 Games Monitor , the number

of full-time game programs has increased by 25% from 35 to 44. Next to dedicated programs, many knowledge

institutions also offer a range of game minors and single courses to their students. These minors and courses are

Strong growth in new studios: at least half of game development studios are younger than 5 years

part of Communication and Media Design, Computer Science, or Technical programs. This has resulted in a

These 10 to 20 studios are responsible for at least 50, and in some cases up to 80% of the entire workforce

THE ANNUAL OUTFLOW OF ALL GAME STUDENTS HAS GROWN TO APPROXIMATELY 1600.

Difference between The Netherlands and most other European countries:

If one takes into account that an estimated 70% of

at a university of applied science, the outflow of core

Preliminary analysis of alumni show that 30% have found

a job in the games industry, 50% of the alumni work in the

etc.), and the remaining 20% of the full-time alumni have found jobs outside the creative industry (software

To summarize, the Dutch games industry has seen a

rapid growth with an increase of 42%. Entertainment and applied games both remain important in the industry,

Both the quantity and the quality of students has

with a steady growth. Partnerships among applied

been discussed with the industry. The quality of game

game companies are created in order to diminish risk.

education has been disputed. Some believe that the

Challenges facing the industry also remain similar to those

quality of game education is below average, but there

are of course large differences between institutions.

A mismatch between industry needs and educational

levels has been ascertained. Some game studios are

start-ups. Large studios are few and far between but still

remain the heavy hitters in the industry, encompassing the

employees and therefore are forced to look abroad.

majority of the workforce. An increase in the number of

Most experts agree that a business-oriented course

game courses and programs has not seen a great increase

should be added to game majors/masters. More

in the type of skills the job market needs. Bridging the gap

knowledge on entrepreneurship is needed.

between industry and education remains a challenge. Last October, the preliminary results from the Games Monitor were presented during Control Conference. Following further research and discus...

Last October, the preliminary results from the Games Monitor were presented during Control Conference. Following further research and discus...