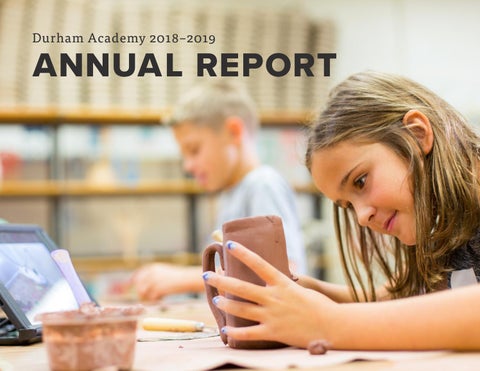 increase in alumni donations over the last 5 years

Board of Trustees participation in the DA Fund

leadership-level gifts to the DA Fund

first-time donors to the DA Fund

Cover photo by Michael Branscom Anna Walsh â&#x20AC;&#x2122;26 concentrates as she details a mug in the Middle School art room.

for our reimagined Middle School begins

relentlessly and joyfully — to fulfill its mission

this fall. We have already secured 100%

of preparing students for moral, happy,

support from our Board of Trustees, along

productive lives. We fulfill this mission when our students and faculty are supported by a community and are empowered to do their best work. As one of those supporters, I feel privileged to witness the lasting effects of a Durham Academy education — on 4-year-olds in our Preschool, on seniors crossing the commencement stage and on alumni across the country who gather to remember their life-changing teachers and to rekindle life-long friendships. This Annual Report documents the philanthropy that undergirds our daily work. Thanks to those listed in the pages that follow, Durham Academy raised an astounding $6,268,723 last year. This outpouring of generosity represents confidence in the institution and — more importantly — hope in the world-changing potential of our students. We celebrate a number of philanthropic milestones this year: • A campaign for Durham Academy. We have initiated a capital campaign to fund urgently needed improvements on our Ridge and Academy road campuses. The Upper School projects have sprung to life already. The first phase of construction

with several lead gifts. We are grateful to all of our early donors. You will hear more about the plans for the campaign as they develop. In the meantime, I welcome any questions about our aspirations, plans and progress. • The DA Fund. We saw record-breaking success in this annual effort. Nearly 1,500 donors gave $1,301,498 to support our dedicated faculty, academic programs and extracurricular offerings. Alumni participation reached an all-time high of 35% — well above our peer schools. A record 95% of our new parents contributed to the DA Fund this year. We are grateful to all the volunteers who helped us achieve these remarkable milestones. • The Parents Association benefit auction. This year’s Green & White Gala raised a record $270,000. Proceeds from the auction fund Parent Association's support of academic enrichment and school-wide programs that make a difference in the lives of our students every day. Thanks to our army of auction volunteers, item donors and winning bidders for their support.

In June, we bid tearful goodbyes to a number

our 85-year history. Providing a world-class

of teachers who had invested two, three or four

education remains our North Star; we can’t do

decades of their lives in Durham Academy. Jeff

this without the financial support you provide

above and beyond tuition.

Harrell, Margarita Throop, Edith Keene, Randy Bryson, Jim Speir and Dennis Cullen remind us all that a strong faculty remains the beating heart of our school.

On behalf of our faculty, staff and students, I thank each of you for your investment in Durham Academy. Your generosity fuels the work we love most: helping our students

With your generous support, our school

develop into their authentic and best selves.

continues to thrive. This year saw our largest-ever enrollment, record admissions demand and the most racially, economically and geographically diverse student body in

2018–2019 Annual Report The purpose of Durham Academy is to provide each student an education that will enable him or her to live a moral, happy and productive life. The development of intellect is central to such a life and thus, intellectual endeavor and growth are the primary work of the school. The acquisition of knowledge; the development of skills, critical judgment and intellectual curiosity; and increased understanding are the goals of the school’s academic program.

of all dollars raised

The Law Offices of Gilda Hernandez

of all dollars raised

Photo by Michael Branscom Holland Hughes ’29 talks with second grade teacher Ashley Hinton about his quilt square that will become part of a class quilt about shapes, symmetry and fractions.

Photo by Michael Branscom Betsy Stover, Kenna Wells and Olivia Kass — all Class of 2024 — share a laugh during PE class.

Larry Carin and Ya Xue

Will and Jamie Chambliss

“The reason we donate to DA is because the school’s core values and principles align with ours. We know that donating funds to Durham Academy will ensure the highest quality of life for the teachers, as well as the very best education for the children. We hope this will make a lasting impact not only on our own children, but future generations to come.” — Zankhna and Selene Parekh, parents of Aarav ’24, Arsh ’26 and Anaya ’29

Will Perreault ’02 and Emily

Photo by Michael Branscom Jacob Bullock ’26 and Catherine Hall ’26 explore a book from their classroom library.

(plus the Netherlands and the UK!)

Thank you to everyone who helped make #DAGivingDay 2019 such an incredible success!

Photo by Michael Branscom Sarra Abdelbarr ’25 and Lily Goldin ’25 share a laugh between classes at the Middle School.

Planned Giving One of the most powerful and philanthropic tools available to Durham Academy’s supporters is planned giving. The benefits of planned giving include tax savings, increased income and providing for heirs, and benefiting

Durham Academy at the same time. Making a planned gift is a special way to support the school because it allows you to

Garrett Putman ’94 and Harriet Putman Will and Patsy Willimon

are available, with the simplest one being

a bequest in your will. Other planned gift

remainder trusts and charitable lead trusts. We strongly recommend you consult with your attorney or tax adviser as you research the most appropriate way to remember DA in your will or estate plans.

We recognize and thank the donors who made payments on capital pledges this year. Your continued support of Durham Academy helps to secure the financial health of the school for the future while our current students flourish in new learning spaces. Mark Anderson ’81 and Mary Eileen Anderson Stephen Barringer ’81 Stephen and Dori Bayer Gus Borda and Wendy Brooks Roger Brooks ’80 and Ann Brooks

long before my daughter enrolled in pre-k. Fifteen years ago, our neighbors had two daughters in Upper School. As I discussed DA with my neighbors, they helped me to understand how important gifts (participating at whatever level my family was comfortable with) were for the school Photo by Michael Branscom When the Upper School STEM & Humanities Center opened in 2018–2019, students quickly became accustomed to large, well-equipped spaces for science projects.

to reach its goals. Therefore, giving to DA has been a legacy that I understood, and it has meant so much to me to be a part of a community of family, alums, staff, faculty and friends who help the school achieve its goals through annual gifts.” — Don Norman, parent of Lydia ’21

Gifts in Honor The following donors made honor gifts during the 2018–2019 school year. The names of those honored are followed by the donor’s name (in italic type). Jordan Adair Win Chesson ’02 Nate Alexander ’22 Marv and Kathy Schneider

Will Graham ’89 and Leigh Graham

The following donors made memorial gifts during the 2018–2019 school year. Gifts were made in memory of these individuals, followed by the name of the donor (in italic type).

Go to da.org/GivingDay for Giving Day Gifts in Honor and Gifts in Memory donor lists.

Thanks to the many volunteers, attendees and bidders who made the 2019 auction a record-breaking one, netting $270,000! Save the Date for the 2020 Online Auction April 1–4

Auction proceeds provide 85% or more of Parents Association’s budget each year, which is used to support outstanding teaching and exceptional student experiences. The auction is online-only in even-numbered years, with a gala event (with both a live auction and online bidding) in odd-numbered years.

Parents Association funds are directed to three main areas: Student Enrichment, Capital Projects and Initiatives, and Schoolwide Programs. These dollars were allocated during the 2018–2019 school year.

These funds support important communitywide events such as the All-School Picnic, Turkey Trot and welcoming events for new parents in each school division. These funds are also used in various ways to thank and

These funds support each division director’s

budget for student life, assemblies and visiting authors and artists. Funding for division-wide events such as Preschool

International Day are provided through

Student Enrichment, as well as funding for

wellness activities in all divisions.

raised $46,250 toward the Parents Association

Jon Duensing and Pauline An Duensing

We are grateful to the DA families and friends who supported the 19th Annual Golf Tournament through tee sponsorships, faculty sponsorships, player fees, mulligan purchases and donations.

$3,000 and Above Brian Polzak and Jacquie LauChial

raised for the DA Fund

Members of Durham Academy’s Board of

Trustees serve as stewards of the school

who hold in trust its mission and reputation.

As such, trustees accept the obligation to not

only preserve, but to advance the institution.

Their work begins with the fiduciary

expectations of duty (due diligence on

(to laws and bylaws). Beyond these duties,

trustees focus on policies and strategies that

are future-focused, working in partnership

with the head of school, who oversees

daily operations. The board utilizes its

committees to study and assess the needs,

activities and performance of the school and

to make recommendations when planning,

Director of the Durham Academy Fund

Associate Director of Development for Data Analytics The Annual Report includes all donations received by Durham Academy between July 1, 2018, and June 30, 2019. Every attempt was made to ensure accuracy in this publication. However, errors do occur and we wish to apologize for any inconvenience they may cause. Please contact the Office of Development at 919-287-1707 for any corrections. A complete financial report was prepared by Thomas, Judy & Tucker, P.A. and is available upon request.

Photo by Michael Branscom Siddhant Desai, Whit Bishop, Owen Hanks and Ronav Reddy — all Class of 2031 — think nothing could be more fun than piling atop each other on a warm spring day. 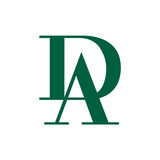