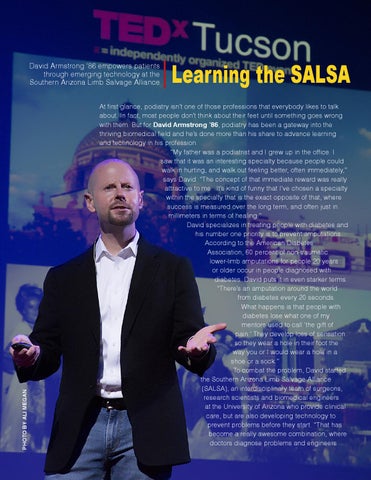 At first glance, podiatry isn’t one of those professions that everybody likes to talk about. In fact, most people don’t think about their feet until something goes wrong with them. But for David Armstrong ’86, podiatry has been a gateway into the thriving biomedical field and he’s done more than his share to advance learning and technology in his profession. “My father was a podiatrist and I grew up in the office. I saw that it was an interesting specialty because people could walk in hurting, and walk out feeling better, often immediately,” says David. “The concept of that immediate reward was really attractive to me. It’s kind of funny that I’ve chosen a specialty within the specialty that is the exact opposite of that, where success is measured over the long term, and often just in millimeters in terms of healing.” David specializes in treating people with diabetes and his number one priority is to prevent amputations. According to the American Diabetes Association, 60 percent of non-traumatic lower-limb amputations for people 20 years or older occur in people diagnosed with diabetes. David puts it in even starker terms. “There’s an amputation around the world from diabetes every 20 seconds. What happens is that people with diabetes lose what one of my mentors used to call ‘the gift of pain.’ They develop loss of sensation so they wear a hole in their foot the way you or I would wear a hole in a shoe or a sock.” To combat the problem, David started the Southern Arizona Limb Salvage Alliance (SALSA), an interdisciplinary team of surgeons, research scientists and biomedical engineers at the University of Arizona who provide clinical care, but are also developing technology to prevent problems before they start. “That has become a really awesome combination, where doctors diagnose problems and engineers