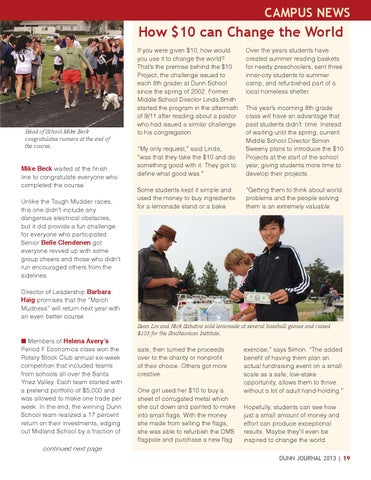 How $10 can Change the World

Head of School Mike Beck congratulates runners at the end of the course.

Mike Beck waited at the finish line to congratulate everyone who completed the course. Unlike the Tough Mudder races, this one didn’t include any dangerous electrical obstacles, but it did provide a fun challenge for everyone who participated. Senior Belle Clendenen got everyone revved up with some group cheers and those who didn’t run encouraged others from the sidelines.

If you were given $10, how would you use it to change the world? That’s the premise behind the $10 Project, the challenge issued to each 8th grader at Dunn School since the spring of 2002. Former Middle School Director Linda Smith started the program in the aftermath of 9/11 after reading about a pastor who had issued a similar challenge to his congregation.

“My only request,” said Linda, “was that they take the $10 and do something good with it. They got to define what good was.”

This year’s incoming 8th grade class will have an advantage that past students didn’t: time. Instead of waiting until the spring, current Middle School Director Simon Sweeny plans to introduce the $10 Projects at the start of the school year, giving students more time to develop their projects.

Director of Leadership Barbara Haig promises that the “March Mudness” will return next year with an even better course. n Members of Helena Avery’s Period F Economics class won the Rotary Stock Club annual six-week competition that included teams from schools all over the Santa Ynez Valley. Each team started with a pretend portfolio of $5,000 and was allowed to make one trade per week. In the end, the winning Dunn School team realized a 17 percent return on their investments, edging out Midland School by a fraction of continued next page

sale, then turned the proceeds over to the charity or nonprofit of their choice. Others got more creative. One girl used her $10 to buy a sheet of corrugated metal which she cut down and painted to make into small flags. With the money she made from selling the flags, she was able to refurbish the DMS flagpole and purchase a new flag.

exercise,” says Simon. “The added benefit of having them plan an actual fundraising event on a small scale as a safe, low-stake opportunity, allows them to thrive without a lot of adult hand-holding.” Hopefully, students can see how just a small amount of money and effort can produce exceptional results. Maybe they’ll even be inspired to change the world. DUNN JOURNAL 2013 | 19