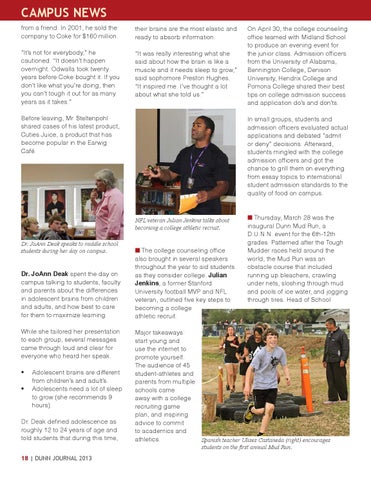 their brains are the most elastic and ready to absorb information.

“It’s not for everybody,” he cautioned. “It doesn’t happen overnight. Odwalla took twenty years before Coke bought it. If you don’t like what you’re doing, then you can’t tough it out for as many years as it takes.”

“It was really interesting what she said about how the brain is like a muscle and it needs sleep to grow,” said sophomore Preston Hughes. “It inspired me. I’ve thought a lot about what she told us.”

Before leaving, Mr. Steltenpohl shared cases of his latest product, Cuties Juice, a product that has become popular in the Earwig Café.

In small groups, students and admission officers evaluated actual applications and debated “admit or deny” decisions. Afterward, students mingled with the college admission officers and got the chance to grill them on everything from essay topics to international student admission standards to the quality of food on campus.

Dr. JoAnn Deak spent the day on campus talking to students, faculty and parents about the differences in adolescent brains from children and adults, and how best to care for them to maximize learning. While she tailored her presentation to each group, several messages came through loud and clear for everyone who heard her speak. • Adolescent brains are different from children’s and adult’s. • Adolescents need a lot of sleep to grow (she recommends 9 hours). Dr. Deak defined adolescence as roughly 12 to 24 years of age and told students that during this time, 18 | DUNN JOURNAL 2013

On April 30, the college counseling office teamed with Midland School to produce an evening event for the junior class. Admission officers from the University of Alabama, Bennington College, Denison University, Hendrix College and Pomona College shared their best tips on college admission success and application do’s and don’ts.

n The college counseling office also brought in several speakers throughout the year to aid students as they consider college. Julian Jenkins, a former Stanford University football MVP and NFL veteran, outlined five key steps to becoming a college athletic recruit. Major takeaways: start young and use the internet to promote yourself. The audience of 45 student-athletes and parents from multiple schools came away with a college recruiting game plan, and inspiring advice to commit to academics and athletics.

n Thursday, March 28 was the inaugural Dunn Mud Run, a D.U.N.N. event for the 6th-12th grades. Patterned after the Tough Mudder races held around the world, the Mud Run was an obstacle course that included running up bleachers, crawling under nets, sloshing through mud and pools of ice water, and jogging through tires. Head of School