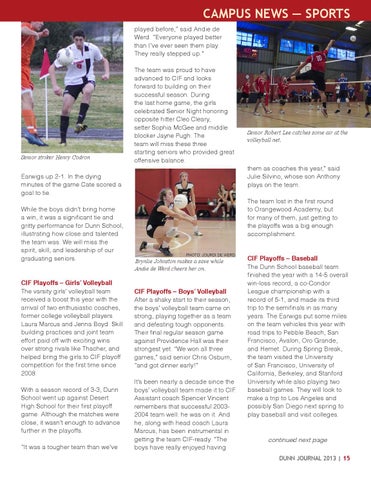 Campus News — Sports played before,” said Andie de Werd. “Everyone played better than I’ve ever seen them play. They really stepped up.”

The team was proud to have advanced to CIF and looks forward to building on their successful season. During the last home game, the girls celebrated Senior Night honoring opposite hitter Cleo Cleary, setter Sophia McGee and middle blocker Jayne Pugh. The team will miss these three starting seniors who provided great offensive balance.

Earwigs up 2-1. In the dying minutes of the game Cate scored a goal to tie. While the boys didn’t bring home a win, it was a significant tie and gritty performance for Dunn School, illustrating how close and talented the team was. We will miss the spirit, skill, and leadership of our graduating seniors. CIF Playoffs – Girls’ Volleyball The varsity girls’ volleyball team received a boost this year with the arrival of two enthusiastic coaches, former college volleyball players Laura Marcus and Jenna Boyd. Skill building practices and joint team effort paid off with exciting wins over strong rivals like Thacher, and helped bring the girls to CIF playoff competition for the first time since 2008. With a season record of 3-3, Dunn School went up against Desert High School for their first playoff game. Although the matches were close, it wasn’t enough to advance further in the playoffs. “It was a tougher team than we’ve

Senior Robert Lee catches some air at the volleyball net.

them as coaches this year,” said Julie Silvino, whose son Anthony plays on the team. The team lost in the first round to Orangewood Academy, but for many of them, just getting to the playoffs was a big enough accomplishment.

Brynlie Johnston makes a save while Andie de Werd cheers her on.

CIF Playoffs – Boys’ Volleyball After a shaky start to their season, the boys’ volleyball team came on strong, playing together as a team and defeating tough opponents. Their final regular season game against Providence Hall was their strongest yet. “We won all three games,” said senior Chris Osburn, “and got dinner early!” It’s been nearly a decade since the boys’ volleyball team made it to CIF. Assistant coach Spencer Vincent remembers that successful 20032004 team well: he was on it. And he, along with head coach Laura Marcus, has been instrumental in getting the team CIF-ready. “The boys have really enjoyed having

CIF Playoffs – Baseball The Dunn School baseball team finished the year with a 14-5 overall win-loss record, a co-Condor League championship with a record of 5-1, and made its third trip to the semifinals in as many years. The Earwigs put some miles on the team vehicles this year with road trips to Pebble Beach, San Francisco, Avalon, Oro Grande, and Hemet. During Spring Break, the team visited the University of San Francisco, University of California, Berkeley, and Stanford University while also playing two baseball games. They will look to make a trip to Los Angeles and possibly San Diego next spring to play baseball and visit colleges.