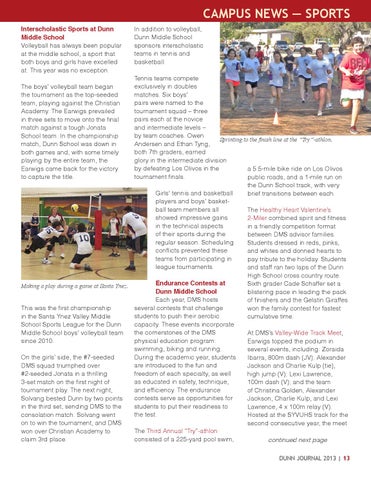 Campus News — Sports Interscholastic Sports at Dunn Middle School Volleyball has always been popular at the middle school, a sport that both boys and girls have excelled at. This year was no exception.

Tennis teams compete exclusively in doubles matches. Six boys’ pairs were named to the tournament squad – three pairs each at the novice and intermediate levels – by team coaches. Owen Sprinting to the finish line at the “Try”-athlon. Andersen and Ethan Tyng, both 7th graders, earned glory in the intermediate division by defeating Los Olivos in the a 5.5-mile bike ride on Los Olivos tournament finals. public roads, and a 1-mile run on the Dunn School track, with very Girls’ tennis and basketball brief transitions between each. players and boys’ basketball team members all The Healthy Heart Valentine’s showed impressive gains 2-Miler combined spirit and fitness in the technical aspects in a friendly competition format of their sports during the between DMS advisor families. regular season. Scheduling Students dressed in reds, pinks, conflicts prevented these and whites and donned hearts to teams from participating in pay tribute to the holiday. Students league tournaments. and staff ran two laps of the Dunn High School cross country route. Endurance Contests at Sixth grader Cade Schaffer set a Making a play during a game at Santa Ynez. Dunn Middle School blistering pace in leading the pack Each year, DMS hosts of finishers and the Gelatin Giraffes several contests that challenge This was the first championship won the family contest for fastest students to push their aerobic in the Santa Ynez Valley Middle cumulative time. capacity. These events incorporate School Sports League for the Dunn the cornerstones of the DMS Middle School boys’ volleyball team At DMS’s Valley-Wide Track Meet, physical education program: since 2010. Earwigs topped the podium in swimming, biking and running. several events, including: Zoraida During the academic year, students On the girls’ side, the #7-seeded Ibarra, 800m dash (JV); Alexander are introduced to the fun and DMS squad triumphed over Jackson and Charlie Kulp (tie), freedom of each specialty, as well #2-seeded Jonata in a thrilling high jump (V); Lexi Lawrence, as educated in safety, technique, 3-set match on the first night of 100m dash (V); and the team and efficiency. The endurance tournament play. The next night, of Christina Golden, Alexander contests serve as opportunities for Solvang bested Dunn by two points Jackson, Charlie Kulp, and Lexi students to put their readiness to in the third set, sending DMS to the Lawrence, 4 x 100m relay (V). the test. consolation match. Solvang went Hosted at the SYVUHS track for the on to win the tournament, and DMS second consecutive year, the meet The Third Annual “Try”-athlon won over Christian Academy to consisted of a 225-yard pool swim, claim 3rd place. continued next page The boys’ volleyball team began the tournament as the top-seeded team, playing against the Christian Academy. The Earwigs prevailed in three sets to move onto the final match against a tough Jonata School team. In the championship match, Dunn School was down in both games and, with some timely playing by the entire team, the Earwigs came back for the victory to capture the title.