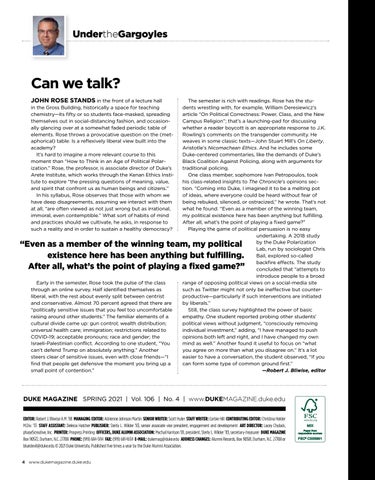 Can we talk? JOHN ROSE STANDS in the front of a lecture hall in the Gross Building, historically a space for teaching chemistry—its fifty or so students face-masked, spreading themselves out in social-distancing fashion, and occasionally glancing over at a somewhat faded periodic table of elements. Rose throws a provocative question on the (metaphorical) table: Is a reflexively liberal view built into the academy? It’s hard to imagine a more relevant course to this moment than “How to Think in an Age of Political Polarization.” Rose, the professor, is associate director of Duke’s Arete Institute, which works through the Kenan Ethics Institute to explore “the pressing questions of meaning, value, and spirit that confront us as human beings and citizens.” In his syllabus, Rose observes that those with whom we have deep disagreements, assuming we interact with them at all, “are often viewed as not just wrong but as irrational, immoral, even contemptible.” What sort of habits of mind and practices should we cultivate, he asks, in response to such a reality and in order to sustain a healthy democracy?

The semester is rich with readings. Rose has the students wrestling with, for example, William Deresiewicz’s article “On Political Correctness: Power, Class, and the New Campus Religion”; that’s a launching-pad for discussing whether a reader boycott is an appropriate response to J.K. Rowling’s comments on the transgender community. He weaves in some classic texts—John Stuart Mill’s On Liberty, Aristotle’s Nicomachean Ethics. And he includes some Duke-centered commentaries, like the demands of Duke’s Black Coalition Against Policing, along with arguments for traditional policing. One class member, sophomore Ivan Petropoulos, took his class-related insights to The Chronicle’s opinions section. “Coming into Duke, I imagined it to be a melting pot of ideas, where everyone could be heard without fear of being rebuked, silenced, or ostracized,” he wrote. That’s not what he found. “Even as a member of the winning team, my political existence here has been anything but fulfilling. After all, what’s the point of playing a fixed game?” Playing the game of political persuasion is no easy undertaking. A 2018 study by the Duke Polarization Lab, run by sociologist Chris Bail, explored so-called backfire effects. The study concluded that “attempts to introduce people to a broad range of opposing political views on a social-media site such as Twitter might not only be ineffective but counterproductive—particularly if such interventions are initiated by liberals.” Still, the class survey highlighted the power of basic empathy. One student reported probing other students’ political views without judgment, “consciously removing individual investment,” adding, “I have managed to push opinions both left and right, and I have changed my own mind as well.” Another found it useful to focus on “what you agree on more than what you disagree on.” It’s a lot easier to have a conversation, the student observed, “if you can form some type of common ground first.” —Robert J. Bliwise, editor

“Even as a member of the winning team, my political existence here has been anything but fulfilling. After all, what’s the point of playing a fixed game?” Early in the semester, Rose took the pulse of the class through an online survey. Half identified themselves as liberal, with the rest about evenly split between centrist and conservative. Almost 70 percent agreed that there are “politically sensitive issues that you feel too uncomfortable raising around other students.” The familiar elements of a cultural divide came up: gun control; wealth distribution; universal health care; immigration; restrictions related to COVID-19; acceptable pronouns; race and gender; the Israeli-Palestinian conflict. According to one student, “You can’t defend Trump on absolutely anything.” Another steers clear of sensitive issues, even with close friends—“I find that people get defensive the moment you bring up a small point of contention.” 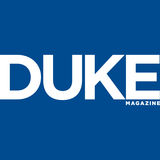