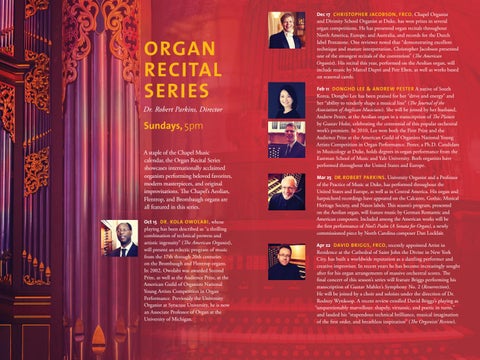 playing has been described as “a thrilling combination of technical prowess and artistic ingenuity” (The American Organist), will present an eclectic program of music from the 17th through 20th centuries on the Brombaugh and Flentrop organs. In 2002, Owolabi was awarded Second Prize, as well as the Audience Prize, at the American Guild of Organists National Young Artists Competition in Organ Performance. Previously the University Organist at Syracuse University, he is now an Associate Professor of Organ at the University of Michigan.

Dec 17 CHRISTOPHER JACOBSON, FRCO, Chapel Organist and Divinity School Organist at Duke, has won prizes in several organ competitions. He has presented organ recitals throughout North America, Europe, and Australia, and records for the Dutch label Pentatone. One reviewer noted that “demonstrating excellent technique and mature interpretation, Christopher Jacobson presented one of the strongest recitals of the convention” (The American Organist). His recital this year, performed on the Aeolian organ, will include music by Marcel Dupré and Petr Eben, as well as works based on seasonal carols. Feb 11 DONGHO LEE &amp; ANDREW PESTER A native of South Korea, Dongho Lee has been praised for her “drive and energy” and her “ability to tenderly shape a musical line” (The Journal of the Association of Anglican Musicians). She will be joined by her husband, Andrew Pester, at the Aeolian organ in a transcription of The Planets by Gustav Holst, celebrating the centennial of this popular orchestral work’s premiere. In 2010, Lee won both the First Prize and the Audience Prize at the American Guild of Organists National Young Artists Competition in Organ Performance. Pester, a Ph.D. Candidate in Musicology at Duke, holds degrees in organ performance from the Eastman School of Music and Yale University. Both organists have performed throughout the United States and Europe. Mar 25 DR. ROBERT PARKINS, University Organist and a Professor of the Practice of Music at Duke, has performed throughout the United States and Europe, as well as in Central America. His organ and harpsichord recordings have appeared on the Calcante, Gothic, Musical Heritage Society, and Naxos labels. This season’s program, presented on the Aeolian organ, will feature music by German Romantic and American composers. Included among the American works will be the first performance of Noel’s Psalm (A Sonata for Organ), a newly commissioned piece by North Carolina composer Dan Locklair. Apr 22 DAVID BRIGGS, FRCO , recently appointed Artist in Residence at the Cathedral of Saint John the Divine in New York City, has built a worldwide reputation as a dazzling performer and creative improviser. In recent years he has become increasingly sought after for his organ arrangements of massive orchestral scores. The final concert of this season’s series will feature Briggs performing his transcription of Gustav Mahler’s Symphony No. 2 (Resurrection). He will be joined by a choir and soloists under the direction of Dr. Rodney Wynkoop. A recent review extolled David Briggs’s playing as “unquestionably marvellous: shapely, virtuosic, and poetic in turns,” and lauded his “stupendous technical brilliance, musical imagination of the first order, and breathless inspiration” (The Organists’ Review).