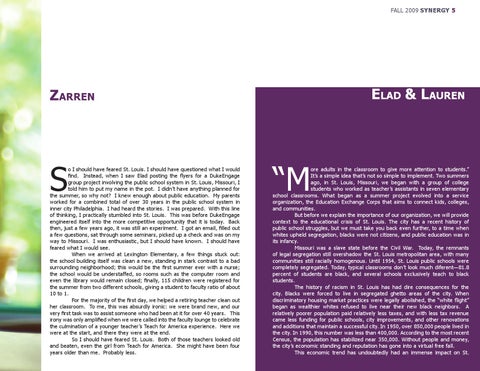 o I should have feared St. Louis. I should have questioned what I would find. Instead, when I saw Elad posting the flyers for a DukeEngage group project involving the public school system in St. Louis, Missouri, I told him to put my name in the pot. I didn’t have anything planned for the summer, so why not? I knew enough about public education. My parents worked for a combined total of over 30 years in the public school system in inner city Philadelphia. I had heard the stories. I was prepared. With this line of thinking, I practically stumbled into St. Louis. This was before DukeEngage engineered itself into the more competitive opportunity that it is today. Back then, just a few years ago, it was still an experiment. I got an email, filled out a few questions, sat through some seminars, picked up a check and was on my way to Missouri. I was enthusiastic, but I should have known. I should have feared what I would see. When we arrived at Lexington Elementary, a few things stuck out: the school building itself was clean a new, standing in stark contrast to a bad surrounding neighborhood; this would be the first summer ever with a nurse; the school would be understaffed, so rooms such as the computer room and even the library would remain closed; finally, 115 children were registered for the summer from two different schools, giving a student to faculty ratio of about 10 to 1. For the majority of the first day, we helped a retiring teacher clean out her classroom. To me, this was absurdly ironic: we were brand new, and our very first task was to assist someone who had been at it for over 40 years. This irony was only amplified when we were called into the faculty lounge to celebrate the culmination of a younger teacher’s Teach for America experience. Here we were at the start, and there they were at the end. So I should have feared St. Louis. Both of those teachers looked old and beaten, even the girl from Teach for America. She might have been four years older than me. Probably less.

ore adults in the classroom to give more attention to students.” It’s a simple idea that’s not so simple to implement. Two summers ago, in St. Louis, Missouri, we began with a group of college students who worked as teacher’s assistants in seven elementary school classrooms. What began as a summer project evolved into a service organization, the Education Exchange Corps that aims to connect kids, colleges, and communities. But before we explain the importance of our organization, we will provide context to the educational crisis of St. Louis. The city has a recent history of public school struggles, but we must take you back even further, to a time when whites upheld segregation, blacks were not citizens, and public education was in its infancy. Missouri was a slave state before the Civil War. Today, the remnants of legal segregation still overshadow the St. Louis metropolitan area, with many communities still racially homogenous. Until 1954, St. Louis public schools were completely segregated. Today, typical classrooms don’t look much diferent—81.8 percent of students are black, and several schools exclusively teach to black students. The history of racism in St. Louis has had dire consequences for the city. Blacks were forced to live in segregated ghetto areas of the city. When discriminatory housing market practices were legally abolished, the “white flight” began as wealthier whites refused to live near their new black neighbors. A relatively poorer population paid relatively less taxes, and with less tax revenue came less funding for public schools, city improvements, and other renovations and additions that maintain a successful city. In 1950, over 850,000 people lived in the city. In 1990, this number was less than 400,000. According to the most recent Census, the population has stabilized near 350,000. Without people and money, the city’s economic standing and reputation has gone into a virtual free fall. This economic trend has undoubtedly had an immense impact on St.