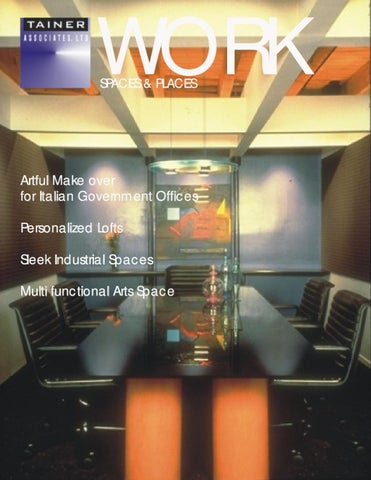 We believe in a layered approach to design, shaped by existing conditions and defined by programmatic concerns, aesthetical wishes and budgetary and temporal constraints. We believe that every solution needs to have its own unique personality and somehow elevate the experience of both the casual observer and the ultimate user. We believe that every solution needs to address all of the senses of the observers and ultimately draw them into the space as participants. We believe in contextual solutions that engage and are engaged by the urban or natural fabric, solutions where the raw space is shaped and is interesting even by itself. Materials, Colors, Lighting, furniture and furnishings are but added layers of necessary requirements that add and augment the total experience and need to be planned out accordingly. We believe in natural and sustainable materials and the beauty inherent in high quality engineering and manufacturing. We believe in well organized and clear presentation that artistically can stand by themselves. We believe in clear, concise and dramatic concepts. We believe in the careful integration of both inside and outside We believe in the art of architecture.

A 65&#39; porticoed interior gallery, defined by two parallel wall planes, organizes a 3500s.f. loft space by acting as a buffer between the public zone, housing the receptionist, waiting and conference areas, and the private workstations and offices of a multi-disciplined (architecture, interior design, graphic design and illustration ) design firm. A modular drywall ceiling grid, reminiscent of the typical organizing elements used to design at any scale by all disciplines, helps to stabilize the wall planes, conceal lighting and render the otherwise tall space more intimate by lowering the ceiling plane while still allowing visual acknowledgment of the existing loft space. Subdued colors and fabrics are intertwined with granites, lacquered woods, glass and metals to demonstrate the richness that can be achieved through creative selection. Accent paint colors are applied only to one face of the built structures to further emphasize the layering effect. This is most evident at the gallery wall where the surface was plastered, gouged and painted to show wear, tear and depth, conjuring images of old European construction. A similar approach, more contemporary and without the build up of texture, highlights the partition between the principal&#39;s office and his meeting area. Future expansion was accommodated with the addition of screened partitions affixed to the ceiling grid that will modulate the present gallery space into four semi-private offices for the managers of each adjoining department. The project was featured in a number of publications.

The project entailed the design an organization of a 1300 sf architecture / interior design office space within a renovated residential loft building which was making a transition to office occupancy. The space already contained a kitchen / bathroom service core which had to remain. Program requirements included a reception area, six work / drafting stations, a conference area and storage. The concept was to respect the character of the loft spaces while creating an image befitting an architect&#39;s own space. The entry / reception area is treated as a

display gallery, framed and defined by two juxtaposing cantilevered forms which pierce through the perimeter of the existing space and which are repeated in the conference room and in plan. All new walls use color against a colorless, existing background and are only 72â&amp;#x20AC;? high in order to create the illusion of a space within a space. The higher limitation also allows the users to partake of the exciting city view from anywhere within the office. The drafting area is treated as a series of low, intersecting planes helping to foster interest and continuity. Lighting is integrated throughout the design

NORTHERN ILLINOIS UNIVERSITY ART GALLERY Approximately 3000 sf in a Chicago loft were developed into a gallery for a major Illinois University. Because of its satellite location, the space also had to accommodate seminars, meetings and receptions for university functions outside the main campus. Built for less than 10 dollars per square foot, the gallery was designed to establish a presence of a new design organization for each exhibit while maintaining respect for the existing structure. Permanent elements enclose a receptionist, a conference space, an office and storage. Through the use of by passing planes, they surround the structure without confining it. A modular system of movable panels and supports provide total flexibility for hanging art as well as for subdividing the space for other uses. The panel supports are truncated at top and bottom to allow a full reveal of the existing architecture

Located on the 18th floor of a Michigan Ave. Office tower, the new 8000 sf offices for the Consulate General of Italy are designed to project a contemporary Italian image while solving the functional aspects of the new interior reorganization. Extremely tight construction budgets of $27 per square foot forced the abundant use of inexpensive materials, like drywall, which were shaped and colored in such a way as to allude to the rich architectural and artistic traditions of Italy. The baroque like curves of the canted walls in the reception area and of those within the administration area bring back memories of the traditional Italian piazzas in addition to the conjuring up of nautical images in tribute to the first Italian discoverers of the New World. Glistening Venetian stucco in three colors provides the only apparent touch of opulence within an otherwise simple, clean, crisp, and bureaucratically neutral color palette. The reddish / ochre color represents the administrative functions (the Quirinale, the parliament building in Rome, has the same tone on its faรงade) and defines the waiting / reception zone and its administrative teller window areas. A deep blue, just like the waters of the Mediterranean, Adriatic and Tirrenean seas is used as a backdrop for the reception and passport windows at the perimeter of the public area. A cal green, like that of the hills and valleys within the Italian mainland, defines the consular section, incorporating the Consul&#39;s office, his administrative assistant, a conference room and a VIP entrance. Canted drywall forms provide visual interest while hiding indirect lighting. Other three dimensional architectural elements allude to a colonnade and define the consular wing. Curved metal forms suspended from the ceiling of the conference room and the consul&#39;s private office continue the reference to Italian architectural forms and structures reinterpreted in modern materials. In keeping with the very public nature of the consulate all individual offices have access to light and views as the actual spaces are pulled back from the building perimeter where the main corridor is placed. This has the effect of crating a public street where consular officers and their guests can visit with one another but still take advantage of the vistas offered by Chicago&#39;s magnificent skyline.

Located at the southern edge of Chicago’s Magnificent Mile and on the 14th floor of a modernist office high rise building built in the 1960’s, the Istituto Italiano di Cultura acts as Italy’s cultural link in the Chicago Area. Charged with the promotion of Italian Culture in the Midwest, the institute needed to provide both the standard functional spaces and required private offices, conference and storage components found anywhere, along with the additional gallery space for housing such diverse activities as exhibitions, film screening, lectures, seminars and receptions. Additionally, larger rooms were required to allow for classroom functions for the Institute’s language program. The 4000 sf of multi functional facility is divided into three distinct areas. The executive office area in one end and the classroom wing at the other, divided by the 2000 sf gallery component in between the two. Each of these areas is thus able to function independently (as they are accessed from separate entrances) and in unity during special functions. The central exhibit area is actually subdivided into two zones; a large main space

and a smaller more intimate one which is linked directly to the two entrances. Each is the expansion space for the other.

With respect to design, the institute is virtually devoid of any obvious traditional references to Italy, relying rather, on utilitarian architectural elements and forms that provide visual interest while hiding lighting and other construction elements, The overall effect is that of a clean simple, neutral architectural background, a perfec container for any type of cultural activity. The functional plan, the arcaded entry area, the baroque-like curves of a second layer in the ceiling and the forced perspective in the office corridors provide the only, even if extremely subtle, reference to Italian architectural forms.

The Istituto Italiano di Cultura, along with the Italian Trade Commission and the Consulate General of Italy, is the third Italian representative office in Chicago designed by the award winning multi disciplinary design studio of Tainer Associates Ltd.

HGTV Inside / Outside &quot;Coppola Residence”