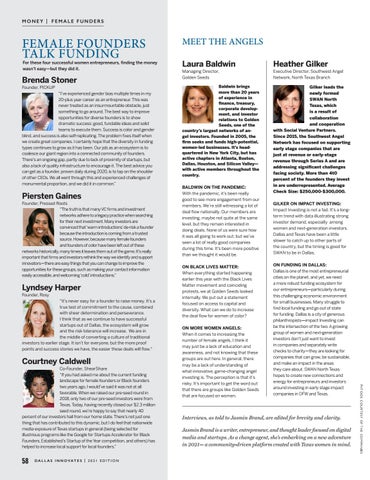 For these four successful women entrepreneurs, finding the money wasn’t easy—but they did it.

Brenda Stoner Founder, PICKUP “I’ve experienced gender bias multiple times in my 20-plus year career as an entrepreneur. This was never treated as an insurmountable obstacle, just something to go around. The best way to improve opportunities for diverse founders is to show dramatic success: good, fundable ideas and solid teams to execute them. Success is color and gender blind, and success is also self-replicating. The problem fixes itself when we create great companies. I certainly hope that the diversity in funding types continues to grow as it has been. Our job as an ecosystem is to coalesce our giant region into a connected community of founders. There’s an ongoing gap, partly due to lack of proximity of startups, but also a lack of quality infrastructure to encourage it. The best advice you can get as a founder, proven daily during 2020, is to tap on the shoulder of other CEOs. We all went through this and experienced challenges of monumental proportion, and we did it in common.”

Piersten Gaines Founder, Pressed Roots “The truth is that many VC firms and investment networks adhere to a legacy practice when searching for their next investment. Many investors are convinced that ‘warm introductions’ de-risk a founder because the introduction is coming from a trusted source. However, because many female founders and founders of color have been left out of these networks historically, many times it leaves them out of the game. It’s really important that firms and investors rethink the way we identify and support innovators—there are easy things that you can change to improve the opportunities for these groups, such as making your contact information easily accessible, and welcoming ‘cold’ introductions.”

Lyndsey Harper Founder, Rosy “It’s never easy for a founder to raise money. It’s a true test of commitment to the cause, combined with sheer determination and perseverance. I think that as we continue to have successful startups out of Dallas, the ecosystem will grow and the risk tolerance will increase. We are in the middle of converting a culture of traditional investors to earlier stage. It isn’t for everyone, but the more proof points and success stories we have, the easier these deals will flow.“

Baldwin brings more than 20 years of experience in finance, treasury, corporate development, and investor relations to Golden Seeds, one of the country’s largest networks of angel investors. Founded in 2005, the firm seeks and funds high-potential, women-led businesses. It’s headquartered in New York City, but has active chapters in Atlanta, Boston, Dallas, Houston, and Silicon Valley— with active members throughout the country.

Gilker leads the newly formed SWAN North Texas, which is a result of collaboration and cooperation with Social Venture Partners. Since 2015, the Southwest Angel Network has focused on supporting early stage companies that are just at revenue or early-stage revenue through Series A and are addressing significant challenges facing society. More than 4t0 percent of the founders they invest in are underrepresented. Average Check Size: $250,000-$300,000.

BALDWIN ON THE PANDEMIC: With the pandemic, it’s been really good to see more engagement from our members. We’re still witnessing a lot of deal flow nationally. Our members are investing, maybe not quite at the same level, but they remain interested in doing deals. None of us were sure how it was all going to work out, but we’ve seen a lot of really good companies during this time. It’s been more positive than we thought it would be. ON BLACK LIVES MATTER: When everything started happening earlier this year with the Black Lives Matter movement and coinciding protests, we at Golden Seeds looked internally. We put out a statement focused on access to capital and diversity. What can we do to increase the deal flow for women of color? ON MORE WOMEN ANGELS: When it comes to increasing the number of female angels, I think it may just be a lack of education and awareness, and not knowing that these groups are out here. In general, there may be a lack of understanding of what innovative, game-changing angel investing is. The perception is that it’s risky. It’s important to get the word out that there are groups like Golden Seeds that are focused on women.

GILKER ON IMPACT INVESTING: Impact Investing is not a fad. It’s a longterm trend with data illustrating strong investor demand, especially among women and next-generation investors. Dallas and Texas have been a little slower to catch up to other parts of the country, but the timing is good for SWAN to be in Dallas. ON FUNDING IN DALLAS: Dallas is one of the most entrepreneurial cities on the planet, and yet, we need a more robust funding ecosystem for our entrepreneurs—particularly during this challenging economic environment for small businesses. Many struggle to find local funding and go out of state for funding. Dallas is a city of generous philanthropists—impact Investing can be the intersection of the two. A growing group of women and next-generation investors don’t just want to invest in companies and separately write checks to charity—they are looking for companies that can grow, be sustainable, and make an impact in the areas they care about. SWAN North Texas hopes to create new connections and energy for entrepreneurs and investors around investing in early stage impact companies in DFW and Texas.

Interviews, as told to Jasmin Brand, are edited for brevity and clarity. Jasmin Brand is a writer, entrepreneur, and thought leader focused on digital media and startups. As a change agent, she’s embarking on a new adventure in 2021— a community-driven platform created with Texas women in mind.

Co-Founder, ShearShare “If you had asked me about the current funding landscape for female founders or Black founders two years ago, I would’ve said it was not at all favorable. When we raised our pre-seed round in 2018, only two of our pre-seed investors were from Texas. Today, having recently closed our $2.3 million seed round, we’re happy to say that nearly 40 percent of our investors hail from our home state. There’s not just one thing that has contributed to this dynamic, but I do feel that nationwide media exposure of Texas startups in general (being selected for illustrious programs like the Google for Startups Accelerator for Black Founders, Established’s Startup of the Year competition, and others) has helped to increase local support for local founders.” 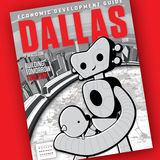