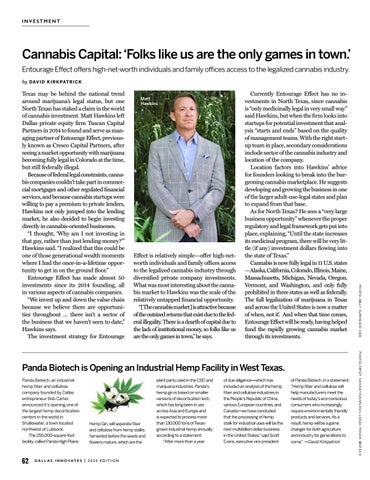 Cannabis Capital: ‘Folks like us are the only games in town.’ Entourage Effect offers high-net-worth individuals and family offices access to the legalized cannabis industry. by DAV I D K I R K PAT R I C K Matt Hawkins

Effect is relatively simple—offer high-networth individuals and family offices access to the legalized cannabis industry through diversified private company investments. What was most interesting about the cannabis market to Hawkins was the scale of the relatively untapped financial opportunity. “[The cannabis market] is attractive because of the outsized returns that exist due to the federal illegality. There is a dearth of capital due to the lack of institutional money, so folks like us are the only games in town,” he says.

Currently Entourage Effect has no investments in North Texas, since cannabis is “only medicinally legal in very small way” said Hawkins, but when the firm looks into startups for potential investment that analysis “starts and ends” based on the quality of management teams. With the right startup team in place, secondary considerations include sector of the cannabis industry and location of the company. Location factors into Hawkins’ advice for founders looking to break into the burgeoning cannabis marketplace. He suggests developing and growing the business in one of the larger adult-use-legal states and plan to expand from that base. As for North Texas? He sees a “very large business opportunity” whenever the proper regulatory and legal framework gets put into place, explaining, “Until the state increases its medicinal program, there will be very little (if any) investment dollars flowing into the state of Texas.” Cannabis is now fully legal in 11 U.S. states —Alaska, California, Colorado, Illinois, Maine, Massachusetts, Michigan, Nevada, Oregon, Vermont, and Washington, and only fully prohibited in three states as well as federally. The full legalization of marijuana in Texas and across the United States is now a matter of when, not if. And when that time comes, Entourage Effect will be ready, having helped fund the rapidly growing cannabis market through its investments.

Hemp Gin, will separate fiber and cellulose from hemp stalks harvested before the seeds and flowers mature, which are the

plant parts used in the CBD and marijuana industries. Panda’s hemp gin is based on smaller versions of decortication tech, which has long been in use across Asia and Europe and is expected to process more than 130,000 tons of Texasgrown industrial hemp annually, according to a statement. “After more than a year

of due diligence—which has included an analysis of the hemp fiber and cellulose industries in the People’s Republic of China, various European countries, and Canada—we have concluded that the processing of hemp stalk for industrial uses will be the next multibillion dollar business in the United States,” said Scott Evans, executive vice president

of Panda Biotech, in a statement. “Hemp fiber and cellulose will help manufacturers meet the needs of today’s eco-conscious consumers who increasingly require environmentally friendly products and services. As a result, hemp will be a game changer for both agriculture and industry for generations to come.” —David Kirkpatrick

Texas may be behind the national trend around marijuana’s legal status, but one North Texan has staked a claim in the world of cannabis investment. Matt Hawkins left Dallas private equity firm Tuscan Capital Partners in 2014 to found and serve as managing partner of Entourage Effect, previously known as Cresco Capital Partners, after seeing a market opportunity with marijuana becoming fully legal in Colorado at the time, but still federally illegal. Because of federal legal constraints, cannabis companies couldn’t take part in commercial mortgages and other regulated financial services, and because cannabis startups were willing to pay a premium to private lenders, Hawkins not only jumped into the lending market, he also decided to begin investing directly in cannabis-oriented businesses. “I thought, ‘Why am I not investing in that guy, rather than just lending money?’” Hawkins said. “I realized that this could be one of those generational wealth moments where I had the once-in-a-lifetime opportunity to get in on the ground floor.” Entourage Effect has made almost 50 investments since its 2014 founding, all in various aspects of cannabis companies. “We invest up and down the value chain because we believe there are opportunities throughout … there isn’t a sector of the business that we haven’t seen to date,” Hawkins says. The investment strategy for Entourage