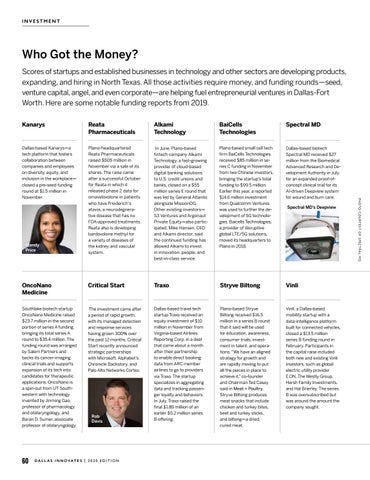 Who Got the Money? Scores of startups and established businesses in technology and other sectors are developing products, expanding, and hiring in North Texas. All those activities require money, and funding rounds—seed, venture capital, angel, and even corporate—are helping fuel entrepreneurial ventures in Dallas-Fort Worth. Here are some notable funding reports from 2019. Reata Pharmaceuticals

Dallas-based Kanarys—a tech platform that fosters collaboration between companies and employees on diversity, equity, and inclusion in the workplace— closed a pre-seed funding round at $1.5 million in November.

Plano-headquartered Reata Pharmaceuticals raised $505 million in November via a sale of its shares. The raise came after a successful October for Reata in which it released phase 2 data for omaveloxolone in patients who have Friederich’s ataxia, a neurodegnerative disease that has no FDA-approved treatments. Reata also is developing bardoxolone methyl for a variety of diseases of the kidney and vascular system.

Dallas-based biotech Spectral MD received $27 million from the Biomedical Advanced Research and Development Authority in July for an expanded proof-ofconcept clinical trial for its AI-driven Deepview system for wound and burn care.

Southlake biotech startup OncoNano Medicine raised $23.7 million in the second portion of series A funding, bringing its total series A round to $35.4 million. The funding round was arranged by Salem Partners and backs its cancer-imaging clinical trials and supports expansion of its tech into candidates for therapeutic applications. OncoNano is a spin-out from UT Southwestern with technology invented by Jinming Gao, professor of pharmacology and otolaryngology, and Baran D. Sumer, associate professor of otolaryngology.

The investment came after a period of rapid growth, with its managed detection and response services having grown 300% over the past 12 months. Critical Start recently announced strategic partnerships with Microsoft, Alphabet’s Chronicle Backstory, and Palo Alto Networks Cortex.

Dallas-based travel tech startup Traxo received an equity investment of $10 million in November from Virginia-based Airlines Reporting Corp. in a deal that came about a month after their partnership to enable direct booking data from ARC member airlines to go to providers via Traxo. The startup specializes in aggregating data and tracking passenger loyalty and behaviors. In July, Traxo raised the final $1.85 million of an earlier $5.2 million series B offering.

Plano-based Stryve Biltong received $16.5 million in a series B round that it said will be used for education, awareness, consumer trials, investment in talent, and operations. “We have an aligned strategy for growth and are rapidly moving to put all the pieces in place to achieve it,” co-founder and Chairman Ted Casey said in Meat + Poultry. Stryve Biltong produces meat snacks that include chicken and turkey bites, beef and turkey sticks, and biltong—a dried, cured meat.

Vinli, a Dallas-based mobility startup with a data-intelligence platform built for connected vehicles, closed a $13.5 million series B funding round in February. Participants in the capital raise included both new and existing Vinli investors, such as global electric utility provider E.ON, The Westly Group, Hersh Family Investments, and Hal Brierley. The series B was oversubscribed but was around the amount the company sought.