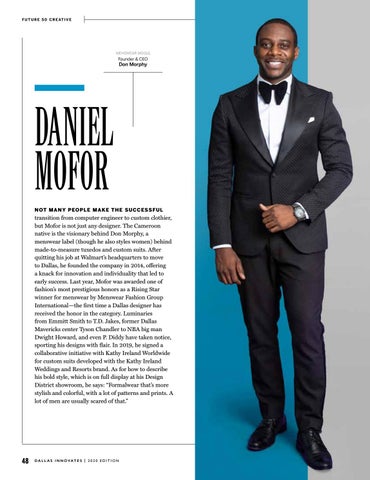 transition from computer engineer to custom clothier, but Mofor is not just any designer. The Cameroon native is the visionary behind Don Morphy, a menswear label (though he also styles women) behind made-to-measure tuxedos and custom suits. After quitting his job at Walmart’s headquarters to move to Dallas, he founded the company in 2014, offering a knack for innovation and individuality that led to early success. Last year, Mofor was awarded one of fashion’s most prestigious honors as a Rising Star winner for menswear by Menswear Fashion Group International—the first time a Dallas designer has received the honor in the category. Luminaries from Emmitt Smith to T.D. Jakes, former Dallas Mavericks center Tyson Chandler to NBA big man Dwight Howard, and even P. Diddy have taken notice, sporting his designs with flair. In 2019, he signed a collaborative initiative with Kathy Ireland Worldwide for custom suits developed with the Kathy Ireland Weddings and Resorts brand. As for how to describe his bold style, which is on full display at his Design District showroom, he says: “Formalwear that’s more stylish and colorful, with a lot of patterns and prints. A lot of men are usually scared of that.”