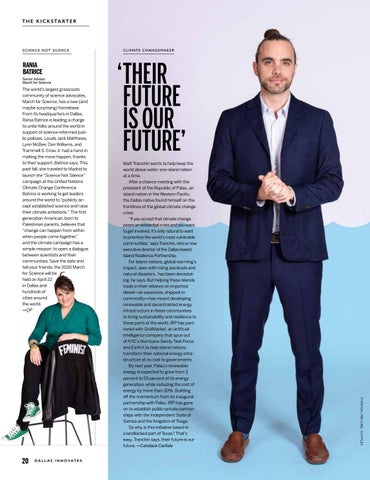 The world’s largest grassroots community of science advocates, March for Science, has a new (and maybe surprising) homebase. From its headquarters in Dallas, Rania Batrice is leading a charge to unite folks around the world in support of science-informed public policies. Locals Jack Matthews, Lynn McBee, Don Williams, and Trammell S. Crow Jr. had a hand in making the move happen, thanks to their support, Batrice says. This past fall, she traveled to Madrid to launch the “Science Not Silence” campaign at the United Nations Climate Change Conference. Batrice is working to get leaders around the world to “publicly accept established science and raise their climate ambitions.“ The first generation American, born to Palestinian parents, believes that “change can happen from within when people come together,” and the climate campaign has a simple mission: to open a dialogue between scientists and their communities. Save the date and tell your friends: the 2020 March for Science will be held on April 22 in Dallas and hundreds of cities around the world. —QP

‘THEIR FUTURE IS OUR FUTURE’ Matt Tranchin wants to help keep the world above water, one island nation at a time. After a chance meeting with the president of the Republic of Palau, an island nation in the Western Pacific, the Dallas native found himself on the frontlines of the global climate change crisis. “If you accept that climate change poses an existential crisis and you want to get involved, it’s only natural to want to prioritize the world’s most vulnerable communities,” says Tranchin, who is now executive director of the Dallas-based Island Resilience Partnership. For island nations, global warming’s impact, seen with rising sea levels and natural disasters, has been devastating, he says. But helping these islands trade in their reliance on imported diesel—an expensive, shipped-in commodity—has meant developing renewable and decentralized energy infrastructure in these communities to bring sustainability and resilience to these parts of the world. IRP has partnered with GridMarket, an artificial intelligence company that spun out of NYC’s Hurricane Sandy Task Force, and EarthX to help island nations transform their national energy infrastructure at no cost to governments. By next year, Palau’s renewable energy is expected to grow from 3 percent to 55 percent of its energy generation, while reducing the cost of energy by more than 30%. Building off the momentum from its inaugural partnership with Palau, IRP has gone on to establish public-private partnerships with the Independent State of Samoa and the Kingdom of Tonga. So why is this initiative based in a landlocked part of Texas? That’s easy, Tranchin says, their future is our future. —Candace Carlisle