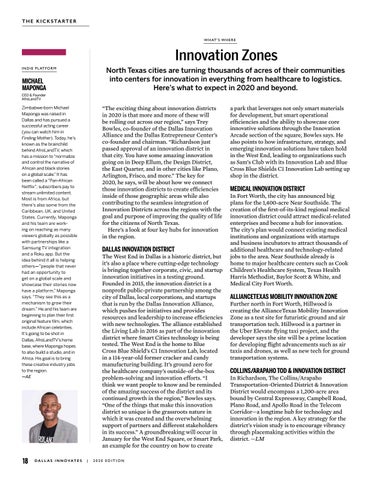 Innovation Zones North Texas cities are turning thousands of acres of their communities into centers for innovation in everything from healthcare to logistics. Here’s what to expect in 2020 and beyond.

“The exciting thing about innovation districts in 2020 is that more and more of these will be rolling out across our region,” says Trey Bowles, co-founder of the Dallas Innovation Alliance and the Dallas Entrepreneur Center’s co-founder and chairman. “Richardson just passed approval of an innovation district in that city. You have some amazing innovation going on in Deep Ellum, the Design District, the East Quarter, and in other cities like Plano, Arlington, Frisco, and more.” The key for 2020, he says, will be about how we connect those innovation districts to create efficiencies inside of those geographic areas while also contributing to the seamless integration of Innovation Districts across the regions with the goal and purpose of improving the quality of life for the citizens of North Texas. Here’s a look at four key hubs for innovation in the region.

Zimbabwe-born Michael Maponga was raised in Dallas and has pursued a successful acting career (you can watch him in Finding Mother). Today, he’s known as the brainchild behind AfroLandTV, which has a mission to “normalize and control the narrative of African and black stories on a global scale.” It has been called a “Pan-African Netflix”; subscribers pay to stream unlimited content. Most is from Africa, but there’s also some from the Caribbean, UK, and United States. Currently, Maponga and his team are working on reaching as many viewers globally as possible with partnerships like a Samsung TV integration and a Roku app. But the idea behind it all is helping others—”people that never had an opportunity to get on a global scale and showcase their stories now have a platform,” Maponga says. “They see this as a mechanism to grow their dream.” He and his team are beginning to plan their first original feature film, which include African celebrities. It’s going to be shot in Dallas, AfroLandTV’s home base, where Maponga hopes to also build a studio, and in Africa. His goal is to bring these creative industry jobs to the region. —AE

The West End in Dallas is a historic district, but it’s also a place where cutting-edge technology is bringing together corporate, civic, and startup innovation initiatives in a testing ground. Founded in 2015, the innovation district is a nonprofit public-private partnership among the city of Dallas, local corporations, and startups that is run by the Dallas Innovation Alliance, which pushes for initiatives and provides resources and leadership to increase efficiencies with new technologies. The alliance established the Living Lab in 2016 as part of the innovation district where Smart Cities technology is being tested. The West End is the home to Blue Cross Blue Shield’s C1 Innovation Lab, located in a 114-year-old former cracker and candy manufacturing building. It’s ground zero for the healthcare company’s outside-of-the-box problem-solving and innovation efforts. “I think we want people to know and be reminded of the amazing success of the district and its continued growth in the region,” Bowles says. “One of the things that make this innovation district so unique is the grassroots nature in which it was created and the overwhelming support of partners and different stakeholders in its success.” A groundbreaking will occur in January for the West End Square, or Smart Park, an example for the country on how to create |

a park that leverages not only smart materials for development, but smart operational efficiencies and the ability to showcase core innovative solutions through the Innovation Arcade section of the square, Bowles says. He also points to how infrastructure, strategy, and emerging innovation solutions have taken hold in the West End, leading to organizations such as Sam’s Club with its Innovation Lab and Blue Cross Blue Shields C1 Innovation Lab setting up shop in the district.

In Fort Worth, the city has announced big plans for the 1,400-acre Near Southside. The creation of the first-of-its-kind regional medical innovation district could attract medical-related enterprises and become a hub for innovation. The city’s plan would connect existing medical institutions and organizations with startups and business incubators to attract thousands of additional healthcare and technology-related jobs to the area. Near Southside already is home to major healthcare centers such as Cook Children’s Healthcare System, Texas Health Harris Methodist, Baylor Scott & White, and Medical City Fort Worth.

Further north in Fort Worth, Hillwood is creating the AllianceTexas Mobility Innovation Zone as a test site for futuristic ground and air transportation tech. Hillwood is a partner in the Uber Elevate flying taxi project, and the developer says the site will be a prime location for developing flight advancements such as air taxis and drones, as well as new tech for ground transportation systems.

In Richardson, The Collins/Arapaho Transportation-Oriented District & Innovation District would encompass a 1,200-acre area bound by Central Expressway, Campbell Road, Plano Road, and Apollo Road in the Telecom Corridor—a longtime hub for technology and innovation in the region. A key strategy for the district’s vision study is to encourage vibrancy through placemaking activities within the district. —LM