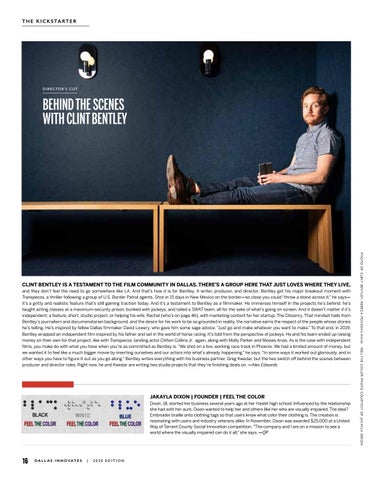 BEHIND THE SCENES WITH CLINT BENTLEY

Dixon, 18, started her business several years ago at her Haslet high school. Influenced by the relationship she had with her aunt, Dixon wanted to help her and others like her who are visually impaired. The idea? Embroider braille onto clothing tags so that users know what color their clothing is. The creation is resonating with users and industry veterans alike. In November, Dixon was awarded $25,000 at a United Way of Tarrant County Social Innovation competition. “The company and I are on a mission to see a world where the visually impaired can do it all,” she says. —QP

CLINT BENTLEY IS A TESTAMENT TO THE FILM COMMUNITY IN DALLAS. THERE’S A GROUP HERE THAT JUST LOVES WHERE THEY LIVE, and they don’t feel the need to go somewhere like LA. And that’s how it is for Bentley. A writer, producer, and director, Bentley got his major breakout moment with Transpecos, a thriller following a group of U.S. Border Patrol agents. Shot in 15 days in New Mexico on the border—so close you could “throw a stone across it,” he says— it’s a gritty and realistic feature that’s still gaining traction today. And it’s a testament to Bentley as a filmmaker. He immerses himself in the projects he’s behind: he’s taught acting classes at a maximum-security prison, bunked with jockeys, and tailed a SWAT team, all for the sake of what’s going on screen. And it doesn’t matter if it’s independent, a feature, short, studio project, or helping his wife, Rachel (who’s on page 46), with marketing content for her startup, The Citizenry. That mindset hails from Bentley’s journalism and documenatarian background, and the desire for his work to be so grounded in reality, the narrative earns the respect of the people whose stories he’s telling. He’s inspired by fellow Dallas fimmaker David Lowery, who gave him some sage advice: “Just go and make whatever you want to make.” To that end, in 2019, Bentley wrapped an independent film inspired by his father and set in the world of horse racing. It’s told from the perspective of jockeys. He and his team ended up raising money on their own for that project, like with Transpecos, landing actor Clifton Collins Jr. again, along with Molly Parker and Moises Arias. As is the case with independent films, you make do with what you have when you’re as committed as Bentley is. “We shot on a live, working race track in Phoenix. We had a limited amount of money, but we wanted it to feel like a much bigger movie by inserting ourselves and our actors into what’s already happening,” he says. “In some ways it worked out gloriously, and in other ways you have to figure it out as you go along.” Bentley writes everything with his business partner, Greg Kwedar, but the two switch off behind the scenes between producer and director roles. Right now, he and Kwedar are writing two studio projects that they’re finishing deals on. —Alex Edwards