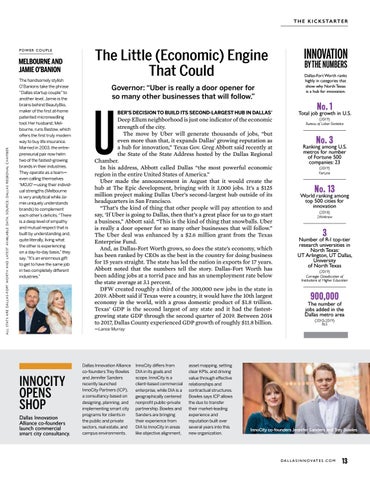 MELBOURNE AND JAMIE O’BANION The handsomely stylish O’Banions take the phrase “Dallas startup couple” to another level. Jamie is the brains behind BeautyBio, maker of the first at-home patented microneedling tool. Her husband, Melbourne, runs Bestow, which offers the first truly modern way to buy life insurance. Married in 2003, the entrepreneurial pair now helm two of the fastest-growing brands in their industries. They operate as a team— even calling themselves ‘MOJO’—using their individual strengths (Melbourne is very analytical while Jamie uniquely understands brands) to complement each other’s deficits. “There is a deep level of empathy and mutual respect that is built by understanding and, quite literally, living what the other is experiencing on a day-to-day basis,” they say. “It’s an enormous gift to get to have the same job in two completely different industries.”

The Little (Economic) Engine That Could Governor: “Uber is really a door opener for so many other businesses that will follow.”

BER’S DECISION TO BUILD ITS SECOND-LARGEST HUB IN DALLAS’

Deep Ellum neighborhood is just one indicator of the economic strength of the city. The move by Uber will generate thousands of jobs, “but even more than that, it expands Dallas’ growing reputation as a hub for innovation,” Texas Gov. Greg Abbott said recently at the State of the State Address hosted by the Dallas Regional Chamber. In his address, Abbott called Dallas “the most powerful economic region in the entire United States of America.” Uber made the announcement in August that it would create the hub at The Epic development, bringing with it 3,000 jobs. It’s a $125 million project making Dallas Uber’s second-largest hub outside of its headquarters in San Francisco. “That’s the kind of thing that other people will pay attention to and say, ‘If Uber is going to Dallas, then that’s a great place for us to go start a business,” Abbott said. “This is the kind of thing that snowballs. Uber is really a door opener for so many other businesses that will follow.” The Uber deal was enhanced by a $2.6 million grant from the Texas Enterprise Fund. And, as Dallas-Fort Worth grows, so does the state’s economy, which has been ranked by CEOs as the best in the country for doing business for 15 years straight. The state has led the nation in exports for 17 years. Abbott noted that the numbers tell the story. Dallas-Fort Worth has been adding jobs at a torrid pace and has an unemployment rate below the state average at 3.1 percent. DFW created roughly a third of the 300,000 new jobs in the state in 2019. Abbott said if Texas were a country, it would have the 10th largest economy in the world, with a gross domestic product of $1.8 trillion. Texas’ GDP is the second largest of any state and it had the fastestgrowing state GDP through the second quarter of 2019. Between 2014 to 2017, Dallas County experienced GDP growth of roughly $11.8 billion.

INNOVATION BY THE NUMBERS

Dallas-Fort Worth ranks highly in categories that show why North Texas is a hub for innovation.

InnoCity differs from DIA in its goals and scope. InnoCity is a client-based commercial enterprise, while DIA is a geographically centered nonprofit public-private partnership. Bowles and Sanders are bringing their experience from DIA to InnoCity in areas like objective alignment,