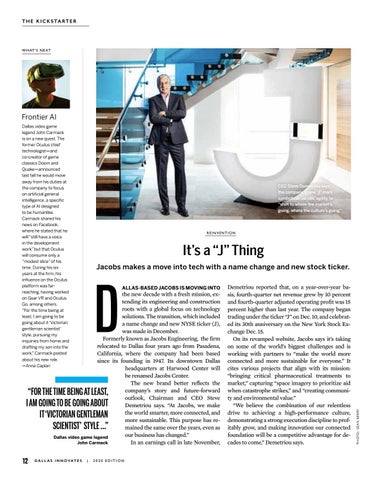 Frontier AI Dallas video game legend John Carmack is on a new quest. The former Oculus chief technologist—and co-creator of game classics Doom and Quake—announced last fall he would move away from his duties at the company to focus on artificial general intelligence, a specific type of AI designed to be humanlike. Carmack shared his news on Facebook, where he stated that he will “still have a voice in the development work” but that Oculus will consume only a “modest slice” of his time. During his six years at the firm, his influence on the Oculus platform was farreaching, having worked on Gear VR and Oculus Go, among others. “For the time being at least, I am going to be going about it ‘Victorian gentleman scientist’ style, pursuing my inquiries from home and drafting my son into the work,” Carmack posted about his new role. —Anna Caplan

CEO Steve Demetriou says the company’s new “J” mark symbolizes Jacobs’ agility to “shift to where the market’s going, where the culture’s going.”

ALLAS-BASED JACOBS IS MOVING INTO

the new decade with a fresh mission, extending its engineering and construction roots with a global focus on technology solutions. The transition, which included a name change and new NYSE ticker (J), was made in December. Formerly known as Jacobs Engineering, the firm relocated to Dallas four years ago from Pasadena, California, where the company had been based since its founding in 1947. Its downtown Dallas headquarters at Harwood Center will be renamed Jacobs Center. The new brand better reflects the company’s story and future-forward outlook, Chairman and CEO Steve Demetriou says. “At Jacobs, we make the world smarter, more connected, and more sustainable. This purpose has remained the same over the years, even as our business has changed.” Dallas video game legend John Carmack In an earnings call in late November,

“FOR THE TIME BEING AT LEAST, I AM GOING TO BE GOING ABOUT IT ‘VICTORIAN GENTLEMAN SCIENTIST’ STYLE ...”

Demetriou reported that, on a year-over-year basis, fourth-quarter net revenue grew by 10 percent and fourth-quarter adjusted operating profit was 15 percent higher than last year. The company began trading under the ticker “J” on Dec. 10, and celebrated its 30th anniversary on the New York Stock Exchange Dec. 15. On its revamped website, Jacobs says it’s taking on some of the world’s biggest challenges and is working with partners to “make the world more connected and more sustainable for everyone.” It cites various projects that align with its mission: “bringing critical pharmaceutical treatments to market,” capturing “space imagery to prioritize aid when catastrophe strikes,” and “creating community and environmental value.” “We believe the combination of our relentless drive to achieving a high-performance culture, demonstrating a strong execution discipline to profitably grow, and making innovation our connected foundation will be a competitive advantage for decades to come,” Demetriou says.

Jacobs makes a move into tech with a name change and new stock ticker.