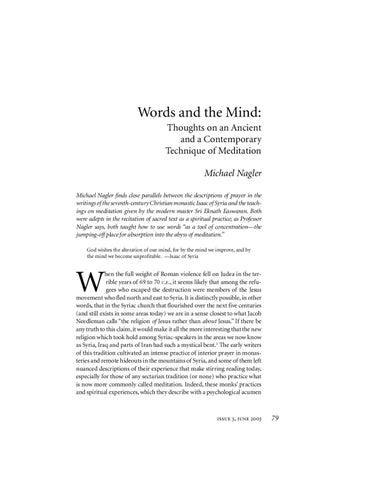 Words and the Mind: Thoughts on an Ancient and a Contemporary Technique of Meditation Michael Nagler Michael Nagler finds close parallels between the descriptions of prayer in the writings of the seventh-century Christian monastic Isaac of Syria and the teachings on meditation given by the modern master Sri Eknath Easwaran. Both were adepts in the recitation of sacred text as a spiritual practice; as Professor Nagler says, both taught how to use words “as a tool of concentration—the jumping-off place for absorption into the abyss of meditation.” God wishes the alteration of our mind, for by the mind we improve, and by the mind we become unprofitable. —Isaac of Syria

hen the full weight of Roman violence fell on Judea in the terrible years of 69 to 70 C.E., it seems likely that among the refugees who escaped the destruction were members of the Jesus movement who fled north and east to Syria. It is distinctly possible, in other words, that in the Syriac church that flourished over the next five centuries (and still exists in some areas today) we are in a sense closest to what Jacob Needleman calls “the religion of Jesus rather than about Jesus.” If there be any truth to this claim, it would make it all the more interesting that the new religion which took hold among Syriac-speakers in the areas we now know as Syria, Iraq and parts of Iran had such a mystical bent.1 The early writers of this tradition cultivated an intense practice of interior prayer in monasteries and remote hideouts in the mountains of Syria, and some of them left nuanced descriptions of their experience that make stirring reading today, especially for those of any sectarian tradition (or none) who practice what is now more commonly called meditation. Indeed, these monks’ practices and spiritual experiences, which they describe with a psychological acumen 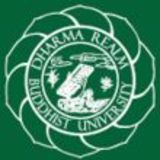 Michael Nagler issue 3, june 2003 Michael Nagler finds close parallels between the descriptions of prayer in the writings of the seventh-cen...

Michael Nagler issue 3, june 2003 Michael Nagler finds close parallels between the descriptions of prayer in the writings of the seventh-cen...