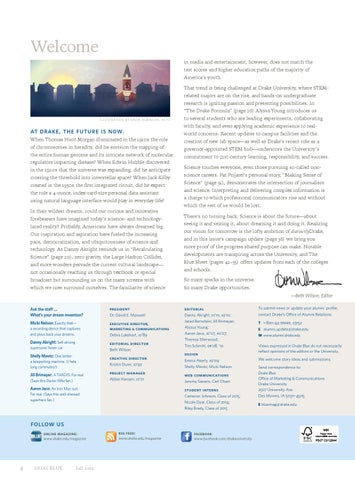 Welcome in media and entertainment, however, does not match the test scores and higher education paths of the majority of America’s youth. That trend is being challenged at Drake University, where STEMrelated majors are on the rise, and hands-on undergraduate research is igniting passion and presenting possibilities. In “The Drake Formula” (page 26) Alyssa Young introduces us ILLUSTRATION BY DREW ALBINSON, AS’13

at drake, the future is now. When Thomas Hunt Morgan illuminated in the 1910s the role of chromosomes in heredity, did he envision the mapping of the entire human genome and its intricate network of molecular regulators impacting disease? When Edwin Hubble discovered in the 1920s that the universe was expanding, did he anticipate crossing the threshold into interstellar space? When Jack Kilby created in the 1950s the first integrated circuit, did he expect the role a 4-ounce, index-card-size personal data assistant using natural language interface would play in everyday life? In their wildest dreams, could our curious and innovative forebearers have imagined today’s science- and technologylaced reality? Probably. Americans have always dreamed big. Our inspiration and aspiration have fueled the increasing pace, democratization, and ubiquitousness of science and technology. As Danny Akright reminds us in “Recalculating Science” (page 20), zero gravity, the Large Hadron Collider, and more wonders pervade the current cultural landscape— not occasionally reaching us through textbook or special

to several students who are leading experiments, collaborating with faculty, and even applying academic experience to realworld concerns. Recent updates to campus facilities and the creation of new lab space—as well as Drake’s recent role as a governor-appointed STEM hub—underscore the University’s commitment to 21st-century learning, responsibility, and success. Science touches everyone, even those pursuing so-called nonscience careers. Pat Prijatel’s personal story, “Making Sense of Science” (page 31), demonstrates the intersection of journalism and science. Interpreting and delivering complex information is a charge to which professional communicators rise and without which the rest of us would be lost. There’s no turning back. Science is about the future—about seeing it and seizing it, about dreaming it and doing it. Realizing our vision for tomorrow is the lofty ambition of distinctlyDrake, and in this issue’s campaign update (page 36) we bring you more proof of the progress shared purpose can make. Notable developments are transpiring across the University, and The Blue Sheet (pages 42–53) offers updates from each of the colleges and schools.

broadcast but surrounding us on the many screens with

So many specks in the universe.

which we now surround ourselves. The familiarity of science

a recording device that captures and plays back your dreams.

Jill Brimeyer: A TARDIS. For real. (Says this Doctor Who fan.) 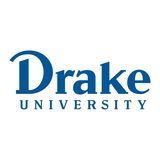