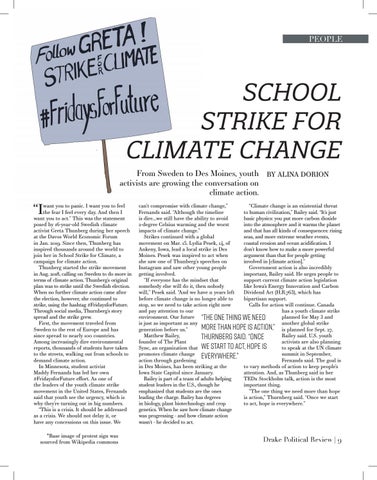 SCHOOL STRIKE FOR CLIMATE CHANGE From Sweden to Des Moines, youth BY ALINA DORION activists are growing the conversation on climate action.

want you to panic. I want you to feel the fear I feel every day. And then I want you to act.” This was the statement posed by 16-year-old Swedish climate activist Greta Thunberg during her speech at the Davos World Economic Forum in Jan. 2019. Since then, Thunberg has inspired thousands around the world to join her in School Strike for Climate, a campaign for climate action. Thunberg started the strike movement in Aug. 2018, calling on Sweden to do more in terms of climate action. Thunberg’s original plan was to strike until the Swedish election. When no further climate action came after the election, however, she continued to strike, using the hashtag #FridaysforFuture. Through social media, Thurnberg’s story spread and the strike grew. First, the movement traveled from Sweden to the rest of Europe and has since spread to nearly 100 countries. Among increasingly dire environmental reports, thousands of students have taken to the streets, walking out from schools to demand climate action. In Minnesota, student activist Maddy Fernands has led her own #FridaysforFuture effort. As one of the leaders of the youth climate strike movement in the United States, Fernands said that youth see the urgency, which is why they’re turning out in big numbers. “This is a crisis. It should be addressed as a crisis. We should not delay it, or have any concessions on this issue. We *Base image of protest sign was sourced from Wikipedia commons

can’t compromise with climate change,” “Climate change is an existential threat Fernands said. “Although the timeline to human civilization,” Bailey said. “It’s just is dire…we still have the ability to avoid basic physics: you put more carbon dioxide 2-degree Celsius warming and the worst into the atmosphere and it warms the planet impacts of climate change.” and that has all kinds of consequences: rising Strikes continued with a global seas, and more extreme weather events, movement on Mar. 15. Lydia Pesek, 14, of coastal erosion and ocean acidification. I Ankeny, Iowa, lead a local strike in Des don’t know how to make a more powerful Moines. Pesek was inspired to act when argument than that for people getting she saw one of Thunberg’s speeches on involved in [climate action].” Instagram and saw other young people Government action is also incredibly getting involved. important, Bailey said. He urges people to “If everyone has the mindset that support current climate action legislation somebody else will do it, then nobody like Iowa’s Energy Innovation and Carbon will,” Pesek said. “And we have 11 years left Dividend Act (H.R.763), which has before climate change is no longer able to bipartisan support. stop, so we need to take action right now Calls for action will continue. Canada and pay attention to our has a youth climate strike environment. Our future “The one thing we need planned for May 3 and is just as important as any another global strike more than hope is action,” is planned for Sept. 27, generation before us.” Matthew Bailey, Bailey said. U.S. youth Thurnberg said. “Once founder of The Plant activists are also planning Sync, an organization that we start to act, hope is to speak at the UN climate promotes climate change summit in September, everywhere.” action through gardening Fernands said. The goal is in Des Moines, has been striking at the to vary methods of action to keep people’s Iowa State Capitol since January. attention. And, as Thunberg said in her Bailey is part of a team of adults helping TEDx Stockholm talk, action is the most student leaders in the U.S., though he important thing. emphasized that students are the ones “The one thing we need more than hope leading the charge. Bailey has degrees is action,” Thurnberg said. “Once we start in biology, plant biotechnology and crop to act, hope is everywhere.” genetics. When he saw how climate change was progressing - and how climate action wasn’t - he decided to act. 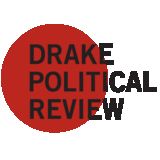 Drake Political Review is a nonpartisan political publication created by and for students at Drake University. Our mission is to create more...

Drake Political Review is a nonpartisan political publication created by and for students at Drake University. Our mission is to create more...