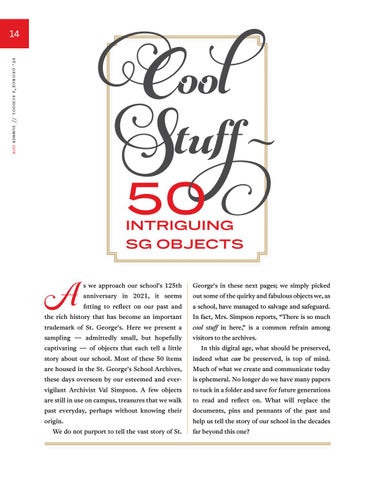 s we approach our school's 125th

George's in these next pages; we simply picked

out some of the quirky and fabulous objects we, as

fitting to reflect on our past and

a school, have managed to salvage and safeguard.

the rich history that has become an important

In fact, Mrs. Simpson reports, “There is so much

trademark of St. George's. Here we present a

cool stuff in here,” is a common refrain among

visitors to the archives.

captivating — of objects that each tell a little

In this digital age, what should be preserved,

story about our school. Most of these 50 items

indeed what can be preserved, is top of mind.

are housed in the St. George's School Archives,

Much of what we create and communicate today

these days overseen by our esteemed and ever-

is ephemeral. No longer do we have many papers

to tuck in a folder and save for future generations

are still in use on campus, treasures that we walk

to read and reflect on. What will replace the

past everyday, perhaps without knowing their

documents, pins and pennants of the past and

help us tell the story of our school in the decades

We do not purport to tell the vast story of St.

far beyond this one?

The charm is engraved with the initials of C.L. Roberts â&#x20AC;&#x2122;30 on one side and the score of the 1928 Middlesex game on the other. The trustees presented the entire team with the miniature gold baseballs that year to celebrate the victory.

School founder the Rev. John Diman used a large interior pocket of this coat to protect his books and papers during long walks to and from St. Columbaâ&#x20AC;&#x2122;s Church.

The club debate during this particular meeting was about whether or not the U.S. should enter the war. Six of the 29 SG casualties of WWII were from the Class of 1940.

Everyone who attended the Consecration of the Chapel received a copy of this book, and many had the dignitaries add their signatures to the inside covers.

medallion, 1914 This Red and White Council

membership medallion belonged to one of the associate editors of The Red and White.

John Diman and the Board of Trustees raised funds toward the purchase of our Middletown campus using stock shares. This certificate is for seven shares purchased by the Rev. Diman.

A possession of science teacher Edward Sturtevant (SG Faculty 1898-1939), this instrument was sold with a wooden case and accessories by Benjamin Pike’s Son Opticians in New York.

The first edition of the school yearbook featured a pen and ink drawing of St. George.

Books acquired for the library were recorded by Headmaster’s Secretary and School Registrar Julia Sheldon. This page lists authors of books acquired March-May 1914.

Mathematics teacher the Rev. Arthur Newton Peaslee donated this elaborately painted cross, which honors members of the school community killed in WWI. It is still used in services today.

For many years this bell was used as the official morning alarm clock. No snooze button to press! Before his retirement, employee Bill Holmes recounted to a Red and White reporter that some of the boys had been heavy sleepers. He would ring this bell within a few inches of their heads. “When they woke up, there sure were fireworks,” he said.

These days, the Binney Cup is awarded on Prize Day to the student with the highest academic average in the sixth form. From 1903 through 1997, both fifth- and sixthformers competed for the Binney Cup, though just one winner was chosen. Marian Guyon Purchas Smith ’76, whose name is engraved on the base of the cup, was the first female to earn the prize. Indeed 1976 was a banner year for women on the Hilltop. Rian’s classmate Addie Dix was the first female senior prefect at St. George’s, showing women made their mark at the school very soon after coeducation began in 1971.

Modeled on popular campaign badges of the era, this pin touted a rivalry of a different sort.

Emblazoned with the phrase, “Franks for the Memories,” this cart was a fixture in King Hall until the early 2000s. As shown here, it was sometimes used as a prop in the annual fall Pie Race. The cart is “the one that got away” according to Mrs. Simpson. It escaped proper archival treatment and, alas, all that remains are the memories.

Afternoon tea was a popular tradition on the Hilltop for many years.

were used in King Hall for decades, but their use was terminated in the early 2000s to conserve energy and water.

This 16mm camera, made by the French manufacturer Beaulieu, was used by our athletic department to film games.

Winfred E. Johnson, choirmaster from 19641971, oversaw the production of this album.

This publication features writing and photographs by members of St. George's AfroLatin Association. “To Be Young, Gifted and Black,” is a 1969 collection of autobiographical writings by Lorraine Hansberry, the playwright best known for “A Raisin in the Sun” — the first play written by an AfricanAmerican woman to be staged on Broadway. Integration began at St. George’s in 1963.

SG boys would add the names of girls

This ribbon from an Italian sailor's cap

who had agreed to dance with them on

this pocket-sized card of the dances

of William Edgar Jr ’37 and mother of

scheduled for the evening.

From adding a single stitch to spending many laborious hours, hundreds of people participated in the creation of this commemorative piece during the Centennial celebration.

Named after Italian scientist Luigi Galvani (1737-1798), this galvanometer measures the movement of charge (electrical current). This and many other vintage pieces of lecture demonstration equipment were salvaged from the du Pont Science building before work began on the west side of the Academic Center in 2014.

A bound notebook with lined pages, this contains signatures of friends and family visitors shortly before the decision was made to rename the school “St. George’s.”

This silver piece commemorates the Consecration of the Chapel with a Latin inscription.

body, 1959 classmates Peter Archer and Francis Fox used this shovel at the groundbreaking for the Van Beuren Gymnasium.

Charles A. Platt imagined this possible landscape layout for the school, though the design was never realized.

A new seal press was needed that year as the school incorporated as an educational nonprofit institution.

This prize was presented by Mrs. Andrew Swan to the writer of the “Best Original Story” in a competition between The Dragon and Cloyne Magazine (of the Cloyne School). In this year, the winner was Leonard Bacon ’05, who went on to become the Pulitzer Prize winner in 1941 for best volume of verse, "Sunderland Capture."

Spring Dance Weekend that year had a ’60s vibe.

catalogue of st. george’s school, 1898-1899 Students of all ages were listed in single alphabetical columns as either “Scholars” or “Day Scholars.” Beginning in 1908, enrollment had grown enough to arrange the names by forms instead. Sixth-formers were listed first, firstformers listed last.

North Pole, was given to Vincent Astor ’10 to

These were made by faculty spouses and others

thank him for his financial support. The flag has

and were often decorated along the side edges

been displayed in the Head of School’s office for

with memorial tributes to alumni. Margery

Wheeler, wife of George Wheeler ’27, was remembered to have spearheaded the effort

this note, composed during Study Hall by his friend “Gordon," who apparently was skilled in writing in “secret code.”

during her time at SG.

At its founding in 1896, St. George’s admitted day students as young as age 8 and boarders at age 11. Within a few years, the youngest boys admitted were First Formers. The first form was discontinued in 1930; second form in 1966. This beanie belonged to Thomas Ives Hare Powel ’06.

One group of students vs. another, the Sachuest/Sakonnet rivalry continued until 1933 — and was revived by the school prefects in 2008-09.

It is not known when these first became part of the festivities, but by Prize Day 2019 many school prefects would remember passing along these “keys to the school” to the next year’s elected student leaders.

brass plaque from WWI ambulance, 1917 The ambulance was donated by St. Georgeâ&#x20AC;&#x2122;s to the Norton-Harjes Ambulance Corps. The story holds that it took a near miracle to recover this plaque at the end of the war; therefore, it was considered a precious memorial object at SG.

These were popular dormitory room decorations.

The activity of the School Battalion continued under the leadership of Headmaster Stephen Cabot during the remaining days of WWI.

This metal sculpture (and its partner), which adorn the Nathaniel P. Hill Library, were rescued by former Art Department Chair Richard Grosvenor following the 1964 demolition of the Manufacturers Building in Providence.

The blacksmith Samuel Alexander Yellin created this and many other pieces of ironwork for the St. George's Chapel, which still adorn the building today. Born in Poland in 1885, he was commissioned by chapel donor John Nicholas Brown, Class of 1918.

Ten years before the design of our current school shield, this calendar featured the traditional St. George's Cross.

Camp Ramleh started in 1926. This page features photos from the first camp session of 1931.

board of trustees record, 1907 Handwritten by Secretary Edward Sturtevant, this page of meeting minutes was accompanied by John Diman’s letter announcing gifts of King Hall and Arden Hall affixed to the left page.

The rivalry between St. George’s and Middlesex School began in the fall of 1902.

The St. George’s Archives boasts thousands of objects, but there are still some coveted pieces of nostalgia we’d love to acquire for our permanent collection. Archivist Val Simpson notes the following items are on her “wish list.” Should you have an item or items you wish to donate, she’d be thrilled to receive your message at archives@stgeorges.edu 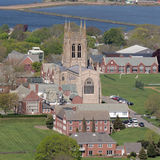