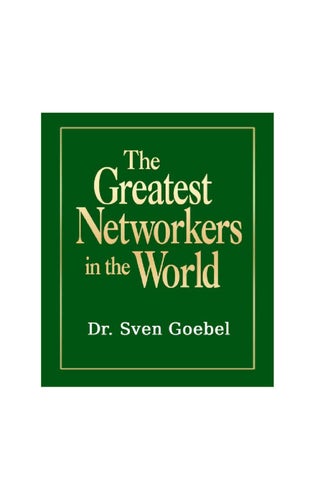 Sven Goebel was born in Hanau, at the river Main in central Germany near Frankfurt. Sven’s dad was an architect and a builder. His mother ran the office of their small construction and real estate company. Sven was their only child and describes his upbringing as “a nice, ordinary, conventional family environment.” Growing up, Sven’s mother was the force in his life. Never able to do the things she wanted to do herself, she was committed to making things different for Sven. It wasn’t about money, the latest clothes or “things.”

Education was the key and Sven’s parents invested heavily in his. From the age of 11, Sven was sent abroad in exchange programs to learn languages and broaden his worldview. His parents came from a generation that wanted their son to have a great education, and one day to be hired by a great company and work there until retirement. But Sven’s world was not the same as his parents and he decided early on his life would be different. When Sven was a teenager of 18 or 19, he started thinking, “What are you doing after you finish school?” He knew he wanted a profession, one where he could deal with people, and he also wanted to do something with his hands. He’d spend his evenings and weekends in his garage, constructing things, fixing his bikes and mopeds, and he loved doing that. And, he wanted to make money. Lots of money.

So, Sven applied for a medical education at the university. Problem was, you needed the very best grades and Sven’s were only second-best. He didn’t get in. What Sven did instead was to begin a science education in chemistry, planning to shift over to medicine later on. But he didn’t have his heart in it. Sven’s first six to 12 months at university were a dismal failure. And that got his attention—at least his ego’s attention. Sven told himself he either had to give it 100% or leave university. He gave it the full 100—and he started to fall in love with his studies. Sven ended up with the best grades in his class and a Cum Laude Ph. D. But the effort was from his head. Not from his heart. The big change in Sven’s life came while he was working on his Ph.D. in 1992. A tennis partner and good friend of his had left university right after his exams, because of failing grades that would not allow him to do his Ph.D. As a chemical engineer he had started his own company. A year later this friend was a huge success, driving a BMW 850, living in wonderful villa apartments and spending more time on the tennis court than ever before. Sven thought, “Wait a minute. Something’s wrong here. Who has the great grades? Who failed? Who’s really succeeded?” Sven wasn’t jealous. Just wondering:

“Which side do I want to be on?” It was at that same time Sven read a quote from Bill Gates, saying that all successful entrepreneurs employ college graduates—“The A students are working for the C students.” Sven was on the wrong side. He suddenly had the deep desire for freedom and wanted nothing to do with being swallowed by a traditional job in the chemical industry.

Out of the blue, Sven got a call from a school friend inviting him to a Network Marketing presentation at a hotel in Frankfurt. It was just a small weekly opportunity meeting. It would change Sven Goebel’s life for the better. For ever. That night he learned there would be a huge event about two hours south of Frankfurt that coming weekend. The number one income earner in the company would be speaking. Sven and his friend decided to go. There were hundreds of people in the room. It was a totally different scenario than they knew at university. Sven was sitting there in jeans with a leather tie, and a borrowed jacket surrounded by excited, ambitious men and women with sparkling eyes dressed sharply in business attire. In the middle of the meeting, the back door opened on a scene Sven will never forget. A young man from Florida strode in. He had leather cowboy boots, a light green suit, carried a crocodile briefcase and was flashing a great big sparkling diamond wristwatch. He walked past in a cloud of cologne. Sven had never seen anything like him before. He was completely blown away. The young man went up on stage and told the audience that he’d made seven million dollars in the business, starting off as a waiter working his way through college. He was 27 years old. His name was Jeff Roberti. Sven turned to his friend and said, “Think about it. Can you and I together accomplish just 10% of what he’s done? Are we capable of that?” His friend looked him straight in the eyes and said, “Definitely!” Sven said,

Sven spent the first few months following the pattern his parents had set out for him: Investing in his education. The man who referred him to the business never actually joined, so Sven had no upline. He was totally on his own. Ever the student, Sven read books. He found a cross-line group close to him and attended their meetings. Sven was a natural speaker and they put him on stage right away. Sven became a part of their organization without being in their pay line. That early experience gave Sven one of the cornerstones of his business philosophy. “We all have to contribute. Not just to our own team. We are responsible for the overall success of the entire organization inside our company and, even more, to the total success of the whole of Network Marketing.” Sven struggled in the beginning because, he says, “I played it the hard way.” He printed flyers, put ads into letter-boxes, knocked on doors, tried to get appointments in doctors’ offices to place displays of the products. It was tough. He did have some help. His dad really wanted this to work for him, so his father called all his friends and said, “When Sven comes and offers his product, purchase it, please. I really want him to succeed.” Helpful, but that didn’t really take Sven very far. At a certain point Sven figured it out. He was able to ignite others when he talked about his vision. He found his passion and got really excited. Sven shifted his focus to the power of the business model and the possibilities it offered people for freedom and independence. He began to focus on people’s “Why.” Sven began finding like-minded people who got carried away with the vision and his organization started to take off right away. Now in his second company, starting with just about the same team of people, the business grew explosively.

“Basically, what made us successful was focus and hard work.” Sven says. “Doing the things we needed to do and sometimes, many times, didn’t feel like doing.”

Sven became a six-figure income earner in his 13th month. He was 29 years old. Sven stayed with them for six years. Unfortunately—even though Sven’s income had grown explosively and the company was a very, very well-known name—they went out of business. Today, being safe and secure in his business and being on top again, Sven is grateful for that experience. But at the time, the loss of such a significant income and having to start all over was pretty tough on him. Sven attributes his success in the business to quickly building a solid infrastructure with weekly opportunity meetings, weekend trainings and a very simple system of daily actions he called KISS. Sven took the old acronym for “Keep It Simple, Stupid!”, and modified it into a daily action cycle of Kontakt (“contact” in German), Information, Start, and School. That was back in 1994 and Sven and his worldwide team still uses it to this day. Sven’s KISS system became super-charged when he shifted his focus from business-building to people-building. Sven felt there must be more to growing a huge organization than prospecting, prospecting, prospecting. He was getting very interested in the subject of leadership, asking, “How do I get ordinary people—including myself—to become real, top charismatic leaders, one day running an organization that expands around the globe?” What Sven figured out was...

“Business growth always follows personal growth.” Next question was: How to implement personal growth into the system? Sven got the answer from the CEO of his company, Stewart Hughes, who gave a training called KASH, which stands for Knowledge, Attitude, Skills, and Habits. The combination of KISS and KASH intrigued Sven, and like a man with a Ph. D. in chemistry, he began to experiment. He developed, tested and refined the formula. Today, that system is all mapped out. That’s what he teaches. It’s on his website, the tools are in place and organizations around the world—many outside of Sven’s own company—are using it with their people and achieving great success. The shift from a focus solely on building the business to becoming a “People Builder,” led Sven Goebel to his mission today: Nothing short of “The Transformation of Network Marketing.” Sven’s goal is to build a “bridge” for those outside the industry to come across into the profession by understanding the real values involved in Network Marketing. That integrity is what leads us. As we take away the hype, fluff and stories, and things start to become more authentic and real, Sven sees that “many, many more people will begin to follow those millions of invitations to join the profession that they’ve received from all those Networkers around the world.” That’s what Sven loves to teach, and even more, to embody and to lead by example. When Sven Goebel started out in Network Marketing two decades ago, he was 26 years old. He admits he wanted the money; the

toys, travel, and the freedom and independence he was sure the business could bring him. He was also a scientist and knew about physics. He saw the power of leverage right away and transferring that knowledge into making money was something that really appealed to him. He became “infected about the business model.” Here was a way to become a business owner (as a student) without any significant cash in his pocket—and with so little risk.

Now that was something he could sell and excite a lot of other people about. And he’s done that. Masterfully. Today, Sven Goebel is comfortable with his company and he shares their goal to become a billion-dollar-plus player in the world market. He’s always dreamed of being part of doing something great like that. For himself, Sven wants to find out how many more people he can take to personal independence, total freedom and excellence before he’s 60. And he wants to take this industry much further than it is today. Dr. Sven Goebel is committed to “The Transformation of Network Marketing,” because as he sees it, that’s the very best way to Transform the World. _________________________