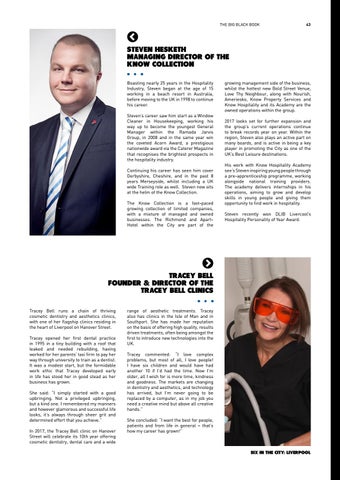 STEVEN HESKETH MANAGING DIRECTOR OF THE KNOW COLLECTION Boasting nearly 25 years in the Hospitality Industry, Steven began at the age of 15 working in a beach resort in Australia, before moving to the UK in 1998 to continue his career. Steven’s career saw him start as a Window Cleaner in Housekeeping, working his way up to become the youngest General Manager within the Ramada Jarvis Group, in 2008 and in the same year win the coveted Acorn Award, a prestigious nationwide award via the Caterer Magazine that recognises the brightest prospects in the hospitality industry. Continuing his career has seen him cover Derbyshire, Cheshire, and in the past 8 years Merseyside, whilst including a UK wide Training role as well. Steven now sits at the helm of the Know Collection. The Know Collection is a fast-paced growing collection of limited companies, with a mixture of managed and owned businesses. The Richmond and ApartHotel within the City are part of the

growing management side of the business, whilst the hottest new Bold Street Venue, Love Thy Neighbour, along with Nourish, Ameriesko, Know Property Services and Know Hospitality and its Academy are the owned operations within the group. 2017 looks set for further expansion and the group’s current operations continue to break records year on year. Within the region, Steven also plays an active part on many boards, and is active in being a key player in promoting the City as one of the UK’s Best Leisure destinations. His work with Know Hospitality Academy see’s Steven inspiring young people through a pre-apprenticeship programme, working alongside national training providers. The academy delivers internships in his operations, aiming to grow and develop skills in young people and giving them opportunity to find work in hospitality. Steven recently won DLIB Livercool’s Hospitality Personality of Year Award.

TRACEY BELL FOUNDER & DIRECTOR OF THE TRACEY BELL CLINICS Tracey Bell runs a chain of thriving cosmetic dentistry and aesthetics clinics, with one of her flagship clinics residing in the heart of Liverpool on Hanover Street. Tracey opened her first dental practice in 1995 in a tiny building with a roof that leaked and needed rebuilding, having worked for her parents’ taxi firm to pay her way through university to train as a dentist. It was a modest start, but the formidable work ethic that Tracey developed early in life has stood her in good stead as her business has grown. She said: “I simply started with a good upbringing. Not a privileged upbringing, but a kind one. I remembered my manners and however glamorous and successful life looks, it’s always through sheer grit and determined effort that you achieve.” In 2017, the Tracey Bell clinic on Hanover Street will celebrate its 10th year offering cosmetic dentistry, dental care and a wide

range of aesthetic treatments. Tracey also has clinics in the Isle of Man and in Southport. She has made her reputation on the basis of offering high quality, results driven treatments, often being amongst the first to introduce new technologies into the UK. Tracey commented: “I love complex problems, but most of all, I love people! I have six children and would have had another 10 if I’d had the time. Now I’m older, all I wish for is more time, kindness and goodness. The markets are changing in dentistry and aesthetics, and technology has arrived, but I’m never going to be replaced by a computer, as in my job you need a creative mind but above all creative hands.” She concluded: “I want the best for people, patients and from life in general – that’s how my career has grown!”

SIX IN THE CITY: LIVERPOOL 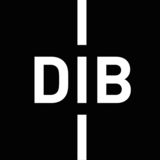