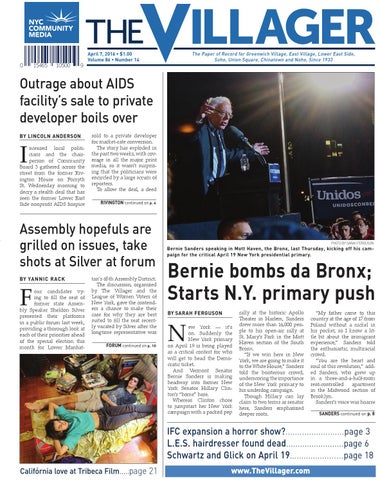 ncensed local politicians and the chairperson of Community Board 3 gathered across the street from the former Rivington House on Forsyth St. Wednesday morning to decry a stealth deal that has seen the former Lower East Side nonprofit AIDS hospice

sold to a private developer for market-rate conversion. The story has exploded in the past two weeks, with coverage in all the major print media, so it wasn’t surprising that the politicians were encircled by a large scrum of reporters. To allow the deal, a deed RIVINGTON continued on p. 4

Assembly hopefuls are grilled on issues, take shots at Silver at forum BY YANNIC RACK

our candidates vying to fill the seat of former state Assembly Speaker Sheldon Silver presented their platforms in a public forum last week, providing a thorough look at each of their priorities ahead of the special election this month for Lower Manhat-

tan’s 65th Assembly District. The discussion, organized by The Villager and the League of Women Voters of New York, gave the contenders a chance to make their case for why they are best suited to fill the seat recently vacated by Silver after the longtime representative was FORUM continued on p. 10

ew York — it’s on. Suddenly the New York primary on  April 19  is being played as a critical contest for who will get to head the Democratic ticket. And Vermont Senator Bernie Sanders is making headway into former New York Senator Hillary Clinton’s “home” base. Whereas Clinton chose to jumpstart her New York campaign with a packed pep

rally at the historic Apollo Theater in Harlem, Sanders drew more than 16,000 people to his open-air rally at St. Mary’s Park in the Mott Haven section of the South Bronx. “If we win here in New York, we are going to make it to the White House,” Sanders told the boisterous crowd, underscoring the importance of the New York primary to his underdog campaign. Though Hillary can lay claim to two terms as senator here, Sanders emphasized deeper roots.

“My father came to this country at the age of 17 from Poland without a nickel in his pocket, so I know a little bit about the immigrant experience,” Sanders told the enthusiastic, multiracial crowd. “You are the heart and soul of this revolution,” added Sanders, who grew up in a three-and-a-half-room rent-controlled apartment in the Midwood section of Brooklyn. Sanders’s voice was hoarse SANDERS continued on p. 8