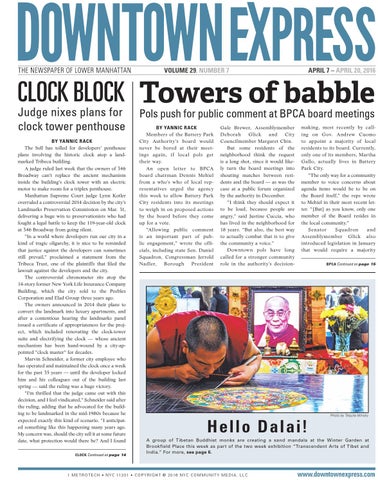 BY YANNIC RACK The bell has tolled for developers’ penthouse plans involving the historic clock atop a landmarked Tribeca building. A judge ruled last week that the owners of 346 Broadway can’t replace the ancient mechanism inside the building’s clock tower with an electric motor to make room for a triplex penthouse. Manhattan Supreme Court judge Lynn Kotler overruled a controversial 2014 decision by the city’s Landmarks Preservation Commission on Mar. 31, delivering a huge win to preservationists who had fought a legal battle to keep the 119-year-old clock at 346 Broadway from going silent. “In a world where developers run our city in a kind of tragic oligarchy, it is nice to be reminded that justice against the developers can sometimes still prevail,” proclaimed a statement from the Tribeca Trust, one of the plaintiffs that filed the lawsuit against the developers and the city. The controversial chronometer sits atop the 14-story former New York Life Insurance Company Building, which the city sold to the Peebles Corporation and Elad Group three years ago. The owners announced in 2014 their plans to convert the landmark into luxury apartments, and after a contentious hearing the landmarks panel issued a certificate of appropriateness for the project, which included renovating the clock-tower suite and electrifying the clock — whose ancient mechanism has been hand-wound by a city-appointed “clock master” for decades. Marvin Schneider, a former city employee who has operated and maintained the clock once a week for the past 35 years — until the developer locked him and his colleagues out of the building last spring — said the ruling was a huge victory. “I’m thrilled that the judge came out with this decision, and I feel vindicated,” Schneider said after the ruling, adding that he advocated for the building to be landmarked in the mid-1980s because he expected exactly this kind of scenario. “I anticipated something like this happening many years ago. My concern was, should the city sell it at some future date, what protection would there be? And I found clock Continued on page 14

Pols push for public comment at BPCA board meetings BY YANNIC RACK Members of the Battery Park City Authority’s board would never be bored at their meetings again, if local pols get their way. An open letter to BPCA board chairman Dennis Mehiel from a who’s who of local representatives urged the agency this week to allow Battery Park City residents into its meetings to weigh in on proposed actions by the board before they come up for a vote. “Allowing public comment is an important part of public engagement,” wrote the officials, including state Sen. Daniel Squadron, Congressman Jerrold Nadler, Borough President

Gale Brewer, Assemblymember Deborah Glick and City Councilmember Margaret Chin. But some residents of the neighborhood think the request is a long shot, since it would likely turn the board meetings into shouting matches between residents and the board — as was the case at a public forum organized by the authority in December. “I think they should expect it to be loud, because people are angry,” said Justine Cuccia, who has lived in the neighborhood for 18 years. “But also, the best way to actually combat that is to give the community a voice.” Downtown pols have long called for a stronger community role in the authority’s decision-

making, most recently by calling on Gov. Andrew Cuomo to appoint a majority of local residents to its board. Currently, only one of its members, Martha Gallo, actually lives in Battery Park City. “The only way for a community member to voice concerns about agenda items would be to be on the Board itself,” the reps wrote to Mehiel in their most recent letter. “[But] as you know, only one member of the Board resides in the local community.” Senator Squadron and Assemblymember Glick also introduced legislation in January that would require a majority

A group of Tibetan Buddhist monks are creating a sand mandala at the Winter Garden at Brookfield Place this week as part of the two week exhibition “Transcendent Arts of Tibet and India.” For more, see page 6.