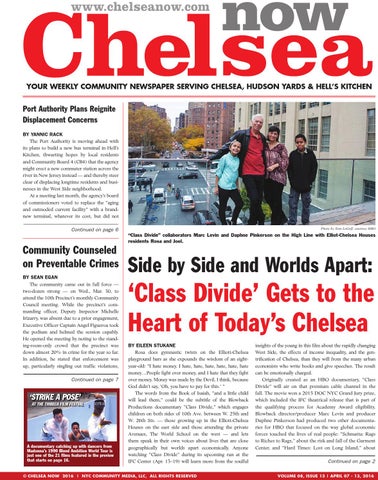 Port Authority Plans Reignite Displacement Concerns BY YANNIC RACK The Port Authority is moving ahead with its plans to build a new bus terminal in Hell’s Kitchen, thwarting hopes by local residents and Community Board 4 (CB4) that the agency might erect a new commuter station across the river in New Jersey instead — and thereby steer clear of displacing longtime residents and businesses in the West Side neighborhood. At a meeting last month, the agency’s board of commissioners voted to replace the “aging and outmoded current facility” with a brandnew terminal, whatever its cost, but did not Continued on page 6

Community Counseled on Preventable Crimes BY SEAN EGAN The community came out in full force — two-dozen strong — on Wed., Mar. 30, to attend the 10th Precinct’s monthly Community Council meeting. While the precinct’s commanding officer, Deputy Inspector Michelle Irizarry, was absent due to a prior engagement, Executive Officer Captain Angel Figueroa took the podium and helmed the session capably. He opened the meeting by noting to the standing-room-only crowd that the precinct was down almost 20% in crime for the year so far. In addition, he stated that enforcement was up, particularly singling out traffic violations, Continued on page 7

AT THE TRIBECA FILM FESTVAL

A documentary catching up with dancers from Madonna’s 1990 Blond Ambition World Tour is just one of the 21 films featured in the preview that starts on page 16.

Side by Side and Worlds Apart:

‘Class Divide’ Gets to the Heart of Today’s Chelsea BY EILEEN STUKANE Rosa does gymnastic twists on the Elliott-Chelsea playground bars as she expounds the wisdom of an eightyear-old: “I hate money. I hate, hate, hate, hate, hate, hate money…People fight over money, and I hate that they fight over money. Money was made by the Devil, I think, because God didn’t say, ‘Oh, you have to pay for this.’ ” The words from the Book of Isaiah, “and a little child will lead them,” could be the subtitle of the Blowback Productions documentary “Class Divide,” which engages children on both sides of 10th Ave. between W. 25th and W. 26th Sts. — those growing up in the Elliott-Chelsea Houses on the east side and those attending the private Avenues, The World School on the west — and lets them speak in their own voices about lives that are close geographically but worlds apart economically. Anyone watching “Class Divide” during its upcoming run at the IFC Center (Apr. 13–19) will learn more from the soulful

insights of the young in this film about the rapidly changing West Side, the effects of income inequality, and the gentrification of Chelsea, than they will from the many urban economists who write books and give speeches. The result can be emotionally charged. Originally created as an HBO documentary, “Class Divide” will air on that premium cable channel in the fall. The movie won a 2015 DOC NYC Grand Jury prize, which included the IFC theatrical release that is part of the qualifying process for Academy Award eligibility. Blowback director/producer Marc Levin and producer Daphne Pinkerson had produced two other documentaries for HBO that focused on the way global economic forces touched the lives of real people: “Schmatta: Rags to Riches to Rags,” about the risk and fall of the Garment Center, and “Hard Times: Lost on Long Island,” about