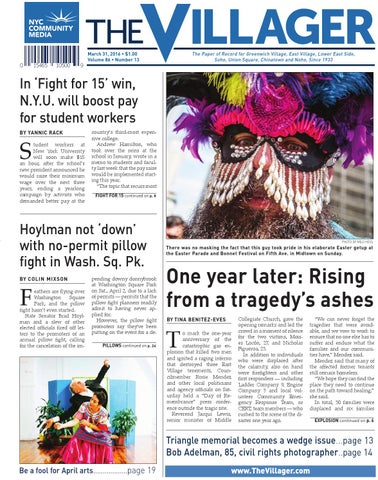 In ‘Fight for 15’ win, N.Y.U. will boost pay for student workers BY YANNIC RACK

tudent workers at New York University will soon make $15 an hour, after the school’s new president announced he would raise their minimum wage over the next three years, ending a yearlong campaign by activists who demanded better pay at the

country’s third-most expensive college. Andrew Hamilton, who took over the reins at the school in January, wrote in a memo to students and faculty last week that the pay raise would be implemented starting this year. “The topic that recurs most FIGHT FOR 15 continued on p. 8

Hoylman not ‘down’ with no-permit pillow fight in Wash. Sq. Pk. BY COLIN MIXSON

eathers are flying over Washington Square Park, and the pillow fight hasn’t even started. State Senator Brad Hoylman and a slew of other elected officials fired off letters to the promoters of an annual pillow fight, calling for the cancelation of the im-

pending downy donnybrook at Washington Square Park on Sat., April 2, due to a lack of permits — permits that the pillow fight planners readily admit to having never applied for. However, the pillow fight promoters say they’ve been putting on the event for a dePILLOWS continued on p. 24

There was no masking the fact that this guy took pride in his elaborate Easter getup at the Easter Parade and Bonnet Festival on Fifth Ave. in Midtown on Sunday.

One year later: Rising from a tragedy’s ashes BY TINA BENITEZ-EVES

Collegiate Church, gave the opening remarks and led the crowd in a moment of silence for the two victims, Moises Locón, 27, and Nicholas Figueroa, 23. In addition to individuals who were displaced after the calamity, also on hand were firefighters and other first responders — including Ladder Company 9, Engine Company 3 and local volunteer Community Emergency Response Team, or CERT, team members — who rushed to the scene of the disaster one year ago.

“We can never forget the tragedies that were avoidable, and we vow to work to ensure that no one else has to suffer and endure what the families and our communities have,” Mendez said. Mendez said that many of the affected former tenants still remain homeless. “We hope they can find the place they need to continue on the path toward healing,” she said. In total, 30 families were displaced and six families EXPLOSION continued on p. 6