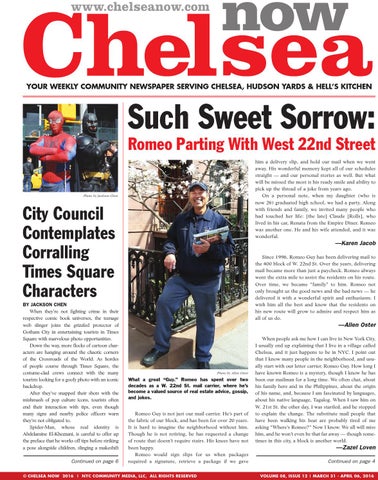 Romeo Parting With West 22nd Street him a delivery slip, and hold our mail when we went away. His wonderful memory kept all of our schedules straight — and our personal stories as well. But what will be missed the most is his ready smile and ability to pick up the thread of a joke from years ago. On a personal note, when my daughter (who is now 26) graduated high school, we had a party. Along with friends and family, we invited many people who had touched her life: [the late] Claude [Rolls], who lived in his car, Renata from the Empire Diner. Romeo was another one. He and his wife attended, and it was wonderful.

City Council Contemplates Corralling Times Square Characters BY JACKSON CHEN When they’re not fighting crime in their respective comic book universes, the teenage web slinger joins the grizzled protector of Gotham City in entertaining tourists in Times Square with marvelous photo opportunities. Down the way, more flocks of cartoon characters are hanging around the chaotic corners of the Crossroads of the World. As hordes of people course through Times Square, the costume-clad crews connect with the many tourists looking for a goofy photo with an iconic backdrop. After they’ve snapped their shots with the mishmash of pop culture icons, tourists often end their interaction with tips, even though many signs and nearby police officers warn they’re not obligated to. Spider-Man, whose real identity is Abdelamine El-Khezzani, is careful to offer up the preface that he works off tips before striking a pose alongside children, slinging a makeshift Continued on page 6

Since 1996, Romeo Guy has been delivering mail to the 400 block of W. 22nd St. Over the years, delivering mail became more than just a paycheck. Romeo always went the extra mile to assist the residents on his route. Over time, we became “family” to him. Romeo not only brought us the good news and the bad news — he delivered it with a wonderful spirit and enthusiasm. I wish him all the best and know that the residents on his new route will grow to admire and respect him as all of us do.

What a great “Guy.” Romeo has spent over two decades as a W. 22nd St. mail carrier, where he’s become a valued source of real estate advice, gossip, and jokes.

Romeo Guy is not just our mail carrier. He’s part of the fabric of our block, and has been for over 20 years. It is hard to imagine the neighborhood without him. Though he is not retiring, he has requested a change of route that doesn’t require stairs. His knees have not been happy. Romeo would sign slips for us when packages required a signature, retrieve a package if we gave

When people ask me how I can live in New York City, I usually end up explaining that I live in a village called Chelsea, and it just happens to be in NYC. I point out that I know many people in the neighborhood, and usually start with our letter carrier, Romeo Guy. How long I have known Romeo is a mystery, though I know he has been our mailman for a long time. We often chat, about his family here and in the Philippines, about the origin of his name, and, because I am fascinated by languages, about his native language, Tagalog. When I saw him on W. 21st St. the other day, I was startled, and he stopped to explain the change. The substitute mail people that have been walking his beat are probably tired of me asking “Where’s Romeo?” Now I know. We all will miss him, and he won’t even be that far away — though sometimes in this city, a block is another world.