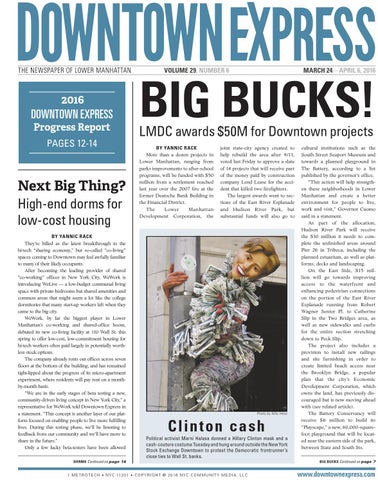 Next Big Thing? High-end dorms for low-cost housing BY YANNIC RACK They’re billed as the latest breakthrough in the hi-tech “sharing economy,” but so-called “co-living” spaces coming to Downtown may feel awfully familiar to many of their likely occupants. After becoming the leading provider of shared “co-working” offices in New York City, WeWork is introducing WeLive — a low-budget communal living space with private bedrooms but shared amenities and common areas that might seem a lot like the college dormitories that many start-up workers left when they came to the big city. WeWork, by far the biggest player in Lower Manhattan’s co-working and shared-office boom, debuted its new co-living facility at 110 Wall St. this spring to offer low-cost, low-commitment housing for hi-tech workers often paid largely in potentially worthless stock options. The company already rents out offices across seven floors at the bottom of the building, and has remained tight-lipped about the progress of its micro-apartment experiment, where residents will pay rent on a monthby-month basis. “We are in the early stages of beta testing a new, community-driven living concept in New York City,” a representative for WeWork told Downtown Express in a statement. “This concept is another layer of our platform focused on enabling people to live more fulfilling lives. During this testing phase, we’ll be listening to feedback from our community and we’ll have more to share in the future.” Only a few lucky beta-testers have been allowed dorms Continued on page 14

Big bucks! LMDC awards $50M for Downtown projects BY YANNIC RACK More than a dozen projects in Lower Manhattan, ranging from parks improvements to after-school programs, will be funded with $50 million from a settlement reached last year over the 2007 fire at the former Deutsche Bank Building in the Financial District. The Lower Manhattan Development Corporation, the

joint state-city agency created to help rebuild the area after 9/11, voted last Friday to approve a slate of 14 projects that will receive part of the money paid by construction company Lend Lease for the accident that killed two firefighters. The largest awards went to sections of the East River Esplanade and Hudson River Park, but substantial funds will also go to

cultural institutions such as the South Street Seaport Museum and towards a planned playground in The Battery, according to a list published by the governor’s office. “This action will help strengthen these neighborhoods in Lower Manhattan and create a better environment for people to live, work and visit,” Governor Cuomo said in a statement. As part of the allocation, Hudson River Park will receive the $10 million it needs to complete the unfinished areas around Pier 26 in Tribeca, including the planned estuarium, as well as platforms, decks and landscaping. On the East Side, $15 million will go towards improving access to the waterfront and enhancing pedestrian connections on the portion of the East River Esplanade running from Robert Wagner Senior Pl. to Catherine Slip in the Two Bridges area, as well as new sidewalks and curbs for the entire section stretching down to Peck Slip. The project also includes a provision to install new railings and site furnishing in order to create limited beach access near the Brooklyn Bridge, a popular plan that the city’s Economic Development Corporation, which owns the land, has previously discouraged but is now moving ahead with (see related article). The Battery Conservancy will receive $6 million to build its “Playscape,” a new, 60,000-squarefoot playground that will be located near the eastern side of the park, between State and South Sts. BIG BUCKS Continued on page 7