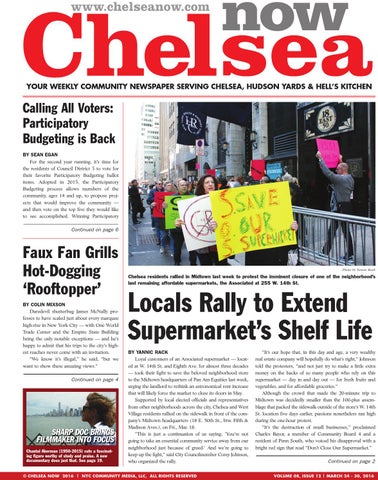 Faux Fan Grills Hot-Dogging ‘Rooftopper’ BY COLIN MIXSON Daredevil shutterbug James McNally professes to have scaled just about every marquee high-rise in New York City — with One World Trade Center and the Empire State Building being the only notable exceptions — and he’s happy to admit that his trips to the city’s highest reaches never come with an invitation. “We know it’s illegal,” he said, “but we want to show these amazing views.” Continued on page 4

Chelsea residents rallied in Midtown last week to protest the imminent closure of one of the neighborhood’s last remaining affordable supermarkets, the Associated at 255 W. 14th St.

Locals Rally to Extend Supermarket’s Shelf Life BY YANNIC RACK Loyal customers of an Associated supermarket — located at W. 14th St. and Eighth Ave. for almost three decades — took their fight to save the beloved neighborhood store to the Midtown headquarters of Pan Am Equities last week, urging the landlord to rethink an astronomical rent increase that will likely force the market to close its doors in May. Supported by local elected officials and representatives from other neighborhoods across the city, Chelsea and West Village residents rallied on the sidewalk in front of the company’s Midtown headquarters (18 E. 50th St., btw. Fifth & Madison Aves.), on Fri., Mar. 18. “This is just a continuation of us saying, ‘You’re not going to take an essential community service away from our neighborhood just because of greed.’ And we’re going to keep up the fight,” said City Councilmember Corey Johnson, who organized the rally.

“It’s our hope that, in this day and age, a very wealthy real estate company will hopefully do what’s right,” Johnson told the protesters, “and not just try to make a little extra money on the backs of so many people who rely on this supermarket — day in and day out — for fresh fruits and vegetables, and for affordable groceries.” Although the crowd that made the 20-minute trip to Midtown was decidedly smaller than the 100-plus assemblage that packed the sidewalk outside of the store’s W. 14th St. location five days earlier, passions nonetheless ran high during the one-hour protest. “It’s the destruction of small businesses,” proclaimed Charles Bayor, a member of Community Board 4 and a resident of Penn South, who voiced his disapproval with a bright red sign that read “Don’t Close Our Supermarket.”